The upcoming issue of Interview Magazine features an interview with Madonna and a new photoshoot by Mert Alas and Marcus Piggott.

On a night this past November, Madonna sat down with her friend, the performance artist, magician, card sharp, and similarly unclassifiable talent David Blaine in New York to talk about the power of silence, the necessity of failure, and hearing the word no.

David Blaine: I brought a whole bunch of cards with questions that I think are really fun, so we have these as a backup plan.

Madonna: A backup plan, or do you want me to choose one now?

David Blaine: Choose one. But I don’t want you to go with the obvious card that’s sticking out more than the others.

Madonna: I’m not that kind of person. I never go for the obvious. [picks a card]

David Blaine: Should I read it to you, though?

David Blaine: This is a good one. So I stayed in a box for 44 days in complete isolation. It was a self-imposed solitary confinement. But … I want you to close your eyes. Can you imagine what it actually feels like to be completely isolated, all by yourself with nobody to talk to?

David Blaine: For a day. Have you ever done that? 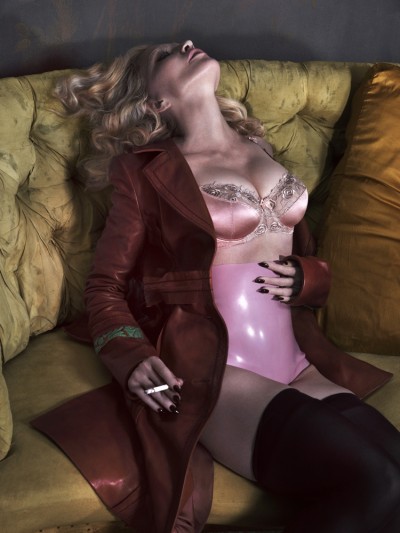 David Blaine: Okay, so think about it. What would it be like?

Madonna: I’d really enjoy it at this point in my life.

Madonna: Okay, sorry. I think I would really enjoy it, stillness and quiet, because I feel like people are always talking to me, at me, asking things, questioning me, wanting information, work, music, loud noises, children—it’s endless. So the idea of a whole day of silence sounds very seductive to me.

David Blaine: What do you think your brain would fill up with?

David Blaine: Ideas. You can do that while you hear noise.

David Blaine: It’s important to find that, once in a while.

Madonna: I started doing yoga again, which I haven’t done in years and years and years. I’m so used to exercising with music playing very loud, and when you do yoga, you’re just listening to your breath, and I find that also incredibly … What’s the word? Not nurturing, but … 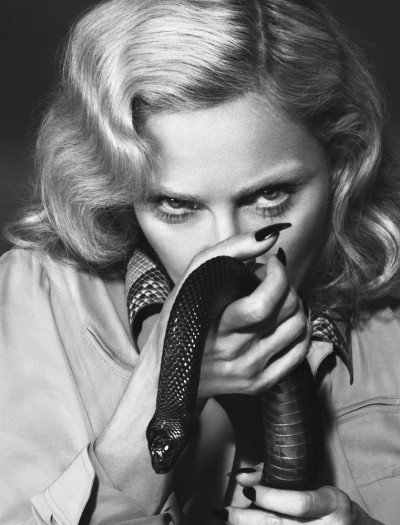 Madonna: It’s cathartic, for sure. But, no, it fills me up. I like the idea of going to one of those retreats where you don’t speak—like, silence for five days. I don’t know if I could do that right now with small children.

David Blaine: Like what the monks do. I actually think that all monks, and saints at that extreme level of deprivation …

Madonna: It’s not selfish if it makes you a better person.

David Blaine: When I do those things, it makes me a better person for the duration, and then when I come out, I’m like an animal.

Madonna: But you’re a selfish pig anyways—that’s another story. [Blaine laughs] You’re not plugged into the matrix. Okay, let me just fix the cards, because I have OCD.

David Blaine: [laughs] Hold on. Let’s go further. Again, you’re just going to close your eyes. Okay, no peeking. Now, you’re on this chair, in this room, but you can’t move from this table. You can lie down if you get uncomfortable. You can stand up, stretch, whatever you want. But you’re completely alone. There’s nobody to interrupt, nobody to talk to. What do you learn? Do you quit? Does it drive you crazy? What do you feel?

Madonna: For how long?

David Blaine: You’re going to be here for one full day. I’ve done 44, so one day is small.

David Blaine: Would you talk to yourself? Would you sing?

Madonna: I would sing.

David Blaine: What would you sing? 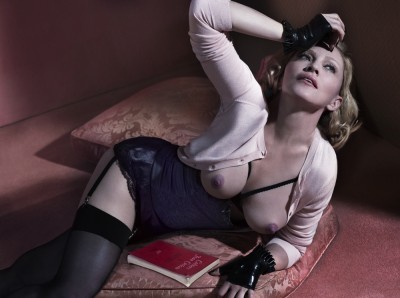 Madonna: I don’t know. It depends on what’s going on in my life at that moment. A Shabbat song? [both laugh] “Shalom Aleichem.” It’s Friday night so …

David Blaine: Do you remember your first favorite childhood song? Just out of curiosity.

Madonna: I do. I don’t remember the name of it.

David Blaine: How does it go?

Madonna: You want me to sing it to you?

David Blaine: Of course! Are you crazy?

Madonna: Is this part of the interview?

David Blaine: This is the best part!

Madonna: Can I open my eyes?

Madonna: Oh, Jesus. So this is visual deprivation as well. Okay. [singing] I know a place where no one ever goes / There’s peace and quiet, beauty and repose / It’s hidden in a valley, behind a mountain stream / and lying there beside the stream I find that I can dream / Only of things, of beauty to the eye, snowflakes and mountains towering in the sky / Now I know that God made this world for me. 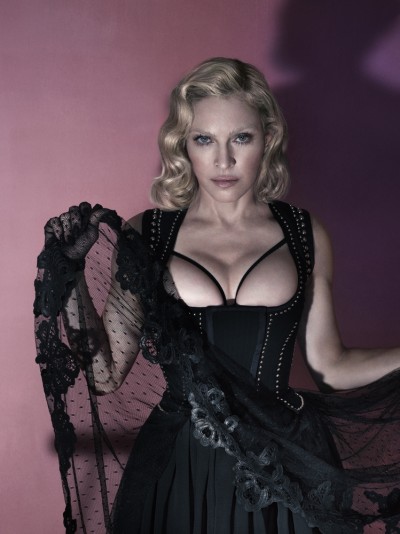 David Blaine: That was beautiful. Wow. How old were you when you heard that song?

Madonna: My mother sang it to me when I was 4. My children know it too.

David Blaine: Okay, you can open your eyes. Cheers.

David Blaine: You knew lots of incredible artists in your early New York days. What artists today do you hope will inspire your children?

Madonna: Well, all those artists are dead.

David Blaine: Artists that are alive, that you know—who do you hope will inspire the children of the future?

Madonna: I like Banksy. I think he’s inspiring and he speaks to what’s going on in the world, socially. I like JR. Like [Jean-Michel] Basquiat and Keith Haring, who both started off as graffiti artists—their art is on the street, available for anyone to see. It’s not elitist. You can see Banksy’s work driving by it on the street, and JR’s work—the way he takes photographs of people and turns them into heroes in their communities and makes people proud of who they are. My son is interning with JR right now and that’s a great education for him.

David Blaine: In the cards, there’s a question directly from JR. But you’re not going to get it now. I should have forced you in that direction. But okay, it’s fine.

Madonna: [laughs] You’re the most neurotic person who’s ever interviewed me, by the way. 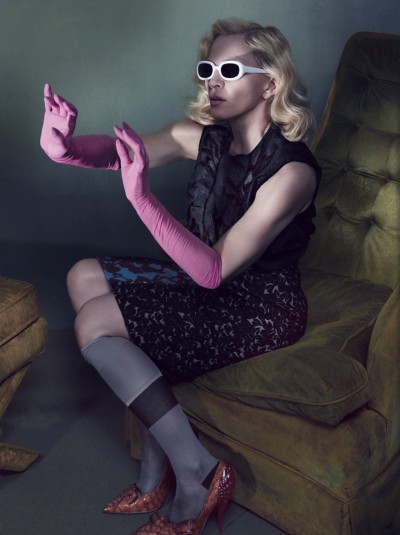 David Blaine: [laughs] What movie scenes do you watch over and over in your mind? Like, I see Daniel Day-Lewis in There Will Be Blood [2007] over and over.

David Blaine: Are there any scenes where the actor is doing a monologue …

Madonna: Oh, acting! I thought you were talking about camera work. I can’t think of a specific scene, but anything that Al Pacino does in The Godfather movies, as Michael Corleone.

David Blaine: Or John Cazale sitting in the chair and yelling at …

Madonna: Well, no, who’s doing the interview, me or you? That’s your scene. Me, I live vicariously through Michael Corleone. I would like to deal with life the way he does. When he’s telling what’s-his-name that he’s going to go on a little fishing trip. My God. Brilliant. Or the scene where Marlon Brando is talking to his dead wife in the casket in Last Tango in Paris [1972].

David Blaine: “You pig fucker.” Supposedly he was sick of acting during that scene, so he started grunting like a pig in his trailer, just to fuck around. And he walks out and improvises that scene to his wife, and that’s how it came out, “You pig fucker.” My favorite thing that Brando said, which I Googled before I came here, goes something like, “You can always tell how great your career’s going based on people’s teeth.” He was saying that you can judge what you did based on the amount of teeth that random people, like the air stewardesses, show you when they see you, how big their smile is.

David Blaine: I think this is also a really important from: Henry Ford, “Thinking is the hardest work there is, which is probably the reason so few engage in it.” And the reason I say this is because when I met you …

Madonna: A hundred years ago.

David Blaine: I went with you to a museum and you had the whole Edward Hopper show to yourself. I remember you were jotting down ideas while looking at the art. I’ve done crazy manual labor—I did construction—and I can say that it’s easier for me to do any stunt than it is to actually figure out what I’m going to do. Thinking is the hardest thing. Like a friend said when I was young, “You know, what Michael Jackson does is easy.” We were, like, 10. But most people assume that it’s easy because you work so hard to make it look like there’s no effort.

Madonna: But that’s our job. We’re in the world of creating illusions and giving people the ability to dream and to be inspired or moved. So you don’t want people to see the labor behind it. Also I was trained that, as a dancer, no matter how much you’re suffering, your face is relaxed. You have to create that illusion. That’s part of your job.

David Blaine: Would you say that thinking is the most difficult part of what you do? 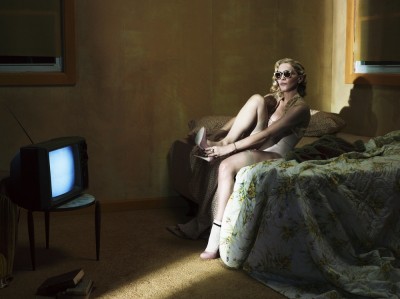