Madonna: No. Sleeping is the most difficult part of what I do, relaxing afterwards. Letting things go. Thinking isn’t something you think about. It comes naturally. Thinking involves many things. It involves being an observer. It involves analyzing things, taking in what’s around you in the world and finding how to make it inspire your work or turn it into a lesson to teach your children; it’s paying attention to details. That’s what thinking is: processing.

David Blaine: Which is why it’s important to have time.

David Blaine: You have to explain that.

Madonna: Well, that’s part of the ritualistic moment. The calling of angels.

David Blaine: What does that mean? What angels? Like, my angel is my mother.

Madonna: Your mother is going to be with you regardless. There are other angels that exist besides your mother. My mother is protecting me, too. But she’s not the only one.

David Blaine: Would you say that your mother is part of the driving force behind you, a little bit?

Madonna: Well, that’s another question. I’m sure that, to a certain extent, she is, but actually, her lack of presence would be the driving force. 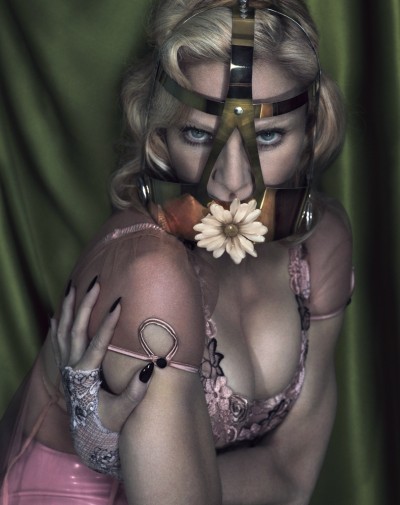 David Blaine: She passed away when you were very young. Did it make you think that life is short?

Madonna: I became very obsessed with death, and the idea that you never know when death will arrive, so one has to do as much as possible all the time to get the most out of life. That would be a motivating force. And death was a big part of my life growing up. I went to lots of funerals … But you digress. [laughs] We were talking about Henry Ford. We were thinking about thinking.

David Blaine: I’ve asked some of my favorite artist friends to come up with one question. Darren Aronofsky asked, “Do you think people are intrinsically good or evil?”

Madonna: I think intrinsically good. Yeah. So there. [both laugh] We’re all good, intrinsically, just covered sometimes in filth and darkness, and our job is to get rid of it, to peel back the layers and reveal our goodness.

David Blaine: How did your early years in New York City around great artists influence the choices that you make in your art today?

Madonna: I remember having conversations with Keith [Haring] and with Basquiat about the importance of your art being accessible to people. That was their big thing—it should be available to everyone. It was so important for Keith to be able to draw on subways and walls. And Basquiat used to say to me, “You’re so lucky that you make music, because music comes out of radios everywhere.” He thought that what I did was more pop, more connected to pop culture than what he did. Little did he know that his art would become pop culture. But it’s not like we really had discussions about the meaning of art. I remember hearing them talk about those things.

David Blaine: Did you hang out with them together?

Madonna: Always. Martin Burgoyne, my roommate, who was also an artist, Keith Haring, and Basquiat. Sometimes Warhol would join us, but Warhol didn’t talk that much. 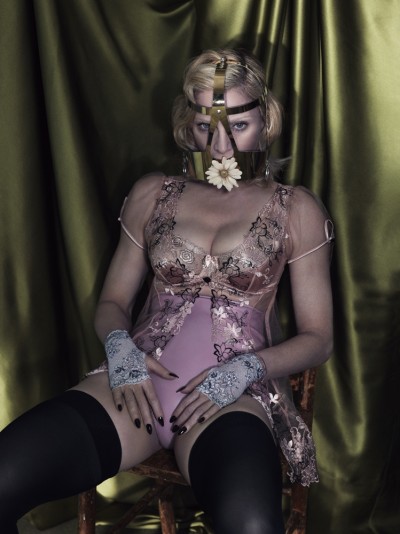 David Blaine: So you were surrounded by the best artists in the world. You were way ahead of your time.

Madonna: I was attracted to creative people. You don’t want to be the smartest person in the room; you want to be the dumbest in the room. You want to be surrounded by other thinking people who are going to say something that makes you think, “Oh, my God, that’s an amazing idea. Why didn’t I think of that.” And somehow we found each other in Manhattan. That’s the crazy thing. We found each other and we connected to each other and we moved around the city together. They supported my shows. I supported their shows. We were a unit. And I don’t even know how it happened. It just did.

David Blaine: Did you learn a lot from them?

Madonna: They were incredibly dedicated to their work. I mean, Basquiat was my boyfriend for a while, and I remember getting up in the middle of the night and he wouldn’t be in bed lying next to me; he’d be standing, painting, at four in the morning, this close to the canvas, in a trance. I was blown away by that, that he worked when he felt moved. And they gave jobs to everyone. Keith would meet kids on the street and ask them to come stretch his canvases for him. Basquiat had every B-boy and every graffiti artist in his loft. He was constantly giving everything away. I think they felt guilty that they became successful and were surrounded by people who were penniless, so they shared what they had. They were incredibly generous people, and that rubbed off on me. You stay inspired that way. I could never work in a recording studio where you have this lovely view and a beach and the waves are crashing. For me, it’s all about being in a tiny room with little windows. It’s almost like you have to be in a prison. And you can create beauty when you’re in that sort of deprived environment, which is a re-creation of your formative years.

David Blaine: I just heard the song “Devil Prays” [from Madonna’s forthcoming album – Read our exclusive post on “Devil Prays” posted in September], and it’s fucking amazing. And it’s not like you were using drugs, but it’s all about drug use … 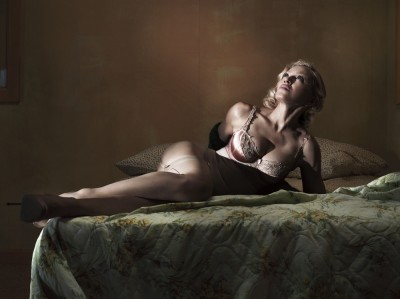 Madonna: Well, no, it’s about how people take drugs to connect to God or to a higher level of consciousness. I keep saying, “Plugging into the matrix.” If you get high, you can do that, which is why a lot of people drop acid or do drugs, because they want to get closer to God. But there’s going to be a short circuit, and that’s the illusion of drugs, because they give you the illusion of getting closer to God, but ultimately they kill you. They destroy you. I mean, I tried everything once, but as soon as I was high, I spent my time drinking tons of water to get it out of my system. As soon as I was high, I was obsessed with flushing it out of me. [Blaine laughs] I was like, “Okay, I’m done now.”

David Blaine: Was that song written to anyone in particular?

Madonna: No, just sharing my experiences that there are different ways to connect to a higher level of consciousness and that it’s the devil’s trick. It is the illusion.

David Blaine: So when you write that type of song, do you just sit there by yourself?

Madonna: No, I’m working with a musician. He’ll start playing a guitar, and ideas just come to me. I have a computer on my lap. I start typing lyrics, and I start thinking of a melody. And then I try it out and say, “What do you guys think?” Everybody’s riffing off each other. I like to see the words written; it inspires me. Poetry, reading, language, playing with words—being around talented songwriters, you develop an innate understanding of what notes sound good together. I don’t really think about it, to tell you the truth. You listen to music, you read books, you watch films. Other people’s art inspires you. I would be nothing without other people’s art.

David Blaine: What else gives you material?

Madonna: My children. Stuff they say. Like, my son came to the studio the other day and said he didn’t want to go home. I said, “No, you have to go home; it’s time for bed.” And he said, “Mom, I feel like I’m isolated from your heart.” [Blaine laughs] I was like, “Oh, that’s a good line. I have to use that.” You get it everywhere, the high and the low. You’ve got to be open to it all. Suffering is a big informer, a big catalyst for creation. You take your sadness, your despair, your sense of injustice, and you put it in your work. 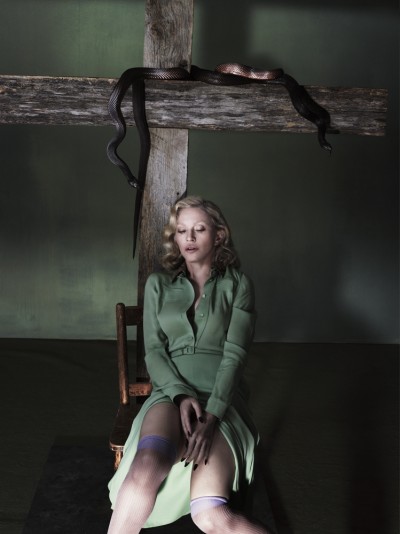 Madonna: Sad. [laughs] Unfortunately. But it’s okay, because I’m sad most of the time, so we’re good. Not sad, but upset about something.

David Blaine: Should we pick another card? If you could go back and speak to yourself at age 7, what would you say? How old were you when your mom passed away?

David Blaine: Okay, so, around that time. What would you say to her?

Madonna: “Shit’s going to get better.” [laughs] At that time, I had an obsession with being ill, and I was constantly manifesting symptoms. I’d say to her, “Everything’s going to be all right.” I would say to myself, “The feeling of ants crawling across your heart does not mean that you have cancer. This life will be long, and the world will unfold to you, and you will be able to realize your dreams, and you will find people to be teachers and guides along the way, and you will find mother figures in other areas of your life, so don’t despair.”

David Blaine: That’s fucking great. [Madonna laughs] Okay. Next card. So what if you woke up one day and music meant nothing to you?

David Blaine: JR’s question is, “Do you think artists can become leaders?”

Madonna: I think they are. Bob Marley was a leader, for instance. Bono is a leader. Some artists don’t want to take that much of a stance and become too political in their work, but I think some people want to and do become that. I think Maya Angelou was political and a leader, and John Lennon, James Baldwin, just to name a few. 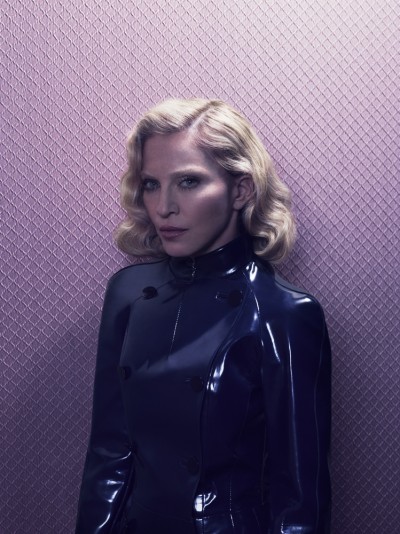 David Blaine: Another artist that I asked to come up with a question for you is Edward Norton. He asks, “Is there an alternative path to the life you chose that you think would have made you happy?”

Madonna: Being a schoolteacher.

David Blaine: That’s what my mother was.

Madonna: Maybe I’m your mother in a parallel universe.

David Blaine: I think it’s the most important profession that exists.

David Blaine: That answers the next question, which is, what’s the most important profession?

Madonna: Prostitution, of course. [both laugh]

David Blaine: What’s your favorite physical feature on a man?

Madonna: Eyes, and then hands.

David Blaine: NASA put something in outer space that’s called Voyager 1, and it’s filled with all sorts of human archives, stuff that if, in a billion years, the world doesn’t exist, would still be floating out there for some other intelligent life to discover. What relics from humanity would you have put in the Voyager?

Madonna: The music of Chopin. Water, because water is mercy, and you can’t live without water. 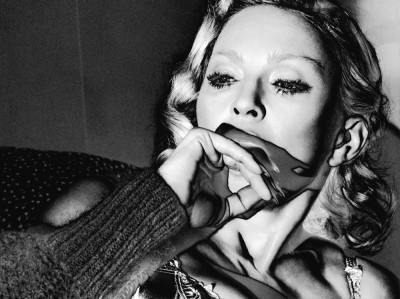