New “Madonna on Ellen” Teasers
Madonna has taped a full episode of The Ellen DeGeneres Show, which will be broadcasted on October 29th!
Here are the first teasers… Madonna in Venice
The Palazzo Mocenigo Museum currently features the notorius Vionnet dress designed by Rodolfo Paglialunga and worn by Madonna at the W.E premiere in Venice, on the 1st of September 2011.
If you’re in the area, you can still go visit it until January 6th 2013. 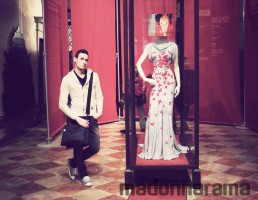 Penny Marshall on recruiting Madonna
Actress and director Penny Marshall tells “Say Anything!” host Joy Behar how she recruited Madonna to star in the softball movie “A League of Their Own.”

A great award for an amazing soundtrack!

I’m an avid Madonna fan, have been since her debut. I’ve noticed that her latest album, “MDNA,” has re-entered the Billboard 200 a couple of times recently, surely due to her touring the U.S. I’m curious to know exactly how many units it has sold and how it compares to her three prior albums: “American Life” (2003), “Confessions on a Dance Floor” (2005) and “Hard Candy” (2008). I truly believe that “MDNA” is a brilliant album and is suffering in sales due to poor singles choices and little radio airplay. I have not heard one track off the set on any top 40 radio station.

I agree that “MDNA” is likely underrated, with “Love Spent” a potential hit that, sadly, may never get its chance as a single. “Give Me All Your Luvin’ ” and “Girl Gone Wild” peaked at Nos. 24 and 38, respectively, on Pop Songs. Third single “Turn Up the Radio” looks unlikely to chart. (Perhaps “Superstar” might?)

Madonna’s current tour has seemingly spurred sales. Three weeks ago, as Madonna toured the East Coast, “MDNA” was No. 94 on the Billboard 200 – but No. 21 in Boston and No. 29 in New York, according to Nielsen SoundScan. Mr. Arturo Avina’s class, from LAUSD’s Olympic Primary Center, performs an altered version of “Material Girl” for their school play, “The Lonely Prince” (based on the story by Max Bollliger). Mr. Avina’s class decided to perform this play as a final project for their language arts unit on friendship. In this scene, which opens the play, maids and butlers bring the Prince an array of toys, but no matter what they bring, he remains bored and unhappy. It is not until much later, when he finally finds a friend, that he understands that material objects will not bring him happiness. The full play, featuring other musical numbers, will debut on YouTube on November 2, 2012.

In case you missed the original Vogue video, here it is again…