Today MDNA got released worldwide and a lot of Madonna info has hit the web.
Here’s a small overview… 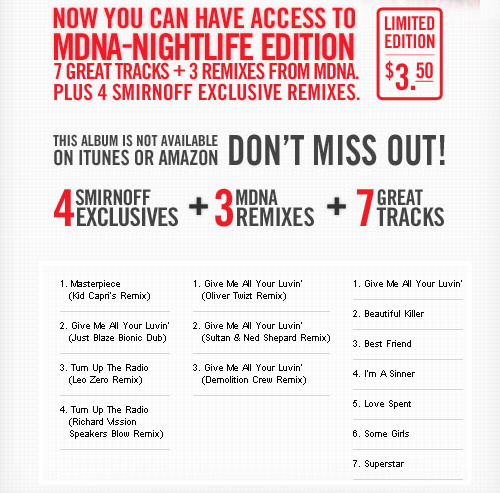 Madonna Launches Her First iPad App
To celebrate the release of her new album MDNA, Madonna has decided to take her fans’ mobile experience to a brand new level.

Today, Madonna announced the release of her revamped iPhone app, but also the launch of her first iPad app. No matter where they are, fans can now stream Madonna’s music, photos, videos and share their thoughts, images and news with other fellow fan friends from around the world using their favorite mobile device.

The free app is available for iPad along with iPhone and Android. Go ahead and download your copy of it from the iTunes App Store, Google Play or by visiting http://www.road.ie/Madonna

LMFAO to open for Madonna
LMFAO will open for Madonna at the Madonna World Tour at Hyde Park in London on July 17th and at the Stade Charles Herman in Nice on August 21st.

MDNA Promo
Yahoo! launched its “upload a picture of yourself with the MDNA album” contest to win PIT passes and promoted the event by posting a video of Madonna singing and kissing Nicki Minaj on the set of “Give me all your Luvin'”.

Spotify also launched their first ever global super fan contest today. Tickets to the Madonna World Tour will be up for grabs.

All the details HERE!

iTunes Charts
MDNA is already #1 on iTunes in 34 countries… and still continues to do great!

Dr. Drew warns us about MDNA

Celebrate The Release Of MDNA With Madonna
Don’t forget: Madonna will be celebrating her new album MDNA with her fans on the day of release, tonight at 10pm EST.
The Material Girl will answer your questions for one-day only via a Twitter account @MadonnaMDNAday. Send your question and include the #askmadonna hashtag at the end. Want to see the chat unfold in real-time? Go to www.madonna.com/askmadonna

Fab offering MDNA at discount
Fab is offering the MDNA Deluxe Edition at $7,99 compared to $14,99 at retail! All the details at Fab.com
Thanks helacool!

#MDNA day. Everyone gets 2 hear the music that has been my constant soundtrack 4 dreaming up costumes 4 Madonna’s world domination in 2012.