UPDATE – 5 June 2012
London’s premiere dubstep duo NERO is pleased to announce that they will join one of the biggest tours of the fall: Madonna’s MDNA Tour.

UPDATE – 2 June 2012
More concerts have been added to the South American leg of the MDNA Tour!

Pre-sales for the extra Buenos Aires date will be available on June 5th at 10am local time, while the São Paolo date pre-sale tickets will start the next day, June 6th at 10am!

Public sales for the extra Buenos Aires date will be available on June 11th at 10am local time, while the São Paolo date public sale will start the next day, June 15th at 12am!

UPDATE – 22 May 2012
Madonna’s official website just added another date to the North American leg of the MDNA Tour!

We are happy to announce that a second show at Mexico City’s Foro Sol was just added to the MDNA Tour schedule and will take place on November 25th!

UPDATE – 3 May 2012
Argentina! Madonna’s MDNA Tour is to stop at Buenos Aires’ River Plate Stadium on December 13 and at Cordoba’s Estadio Kempes on December 22!

A devoted fan club pre-sale for both shows will start at 10am local time for Legacy members (11am for Live Pass members) on May 7th.

UPDATE – 28 April 2012
Some ticket vendors are currently using the following logo for the MDNA World Tour. Real or fake? No word from Live Nation yet… 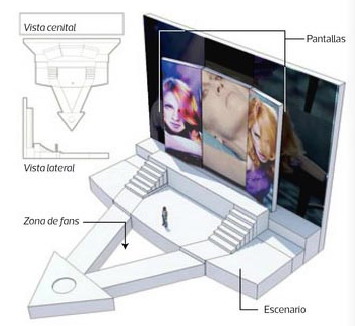 UPDATE – 26 April 2012
The highly anticipated opening of Madonna’s MDNA Tour is now planned for Thursday, May 31st at Ramat Gan Stadium in Tel Aviv, two days later than previously scheduled due to production delays. The change in the opening date was announced today by promoters, Live Nation and Shuki Weiss.

UPDATE – 3 April 2012
Since the first day of ticket presales for the Madonna World Tour different stage set-ups have been mentioned. Every ticket outlet had a different stage plan.
A few weeks ago, Ticketmaster and Guy Oseary also announced a contest to win PIT tickets, which caused some extra confusion.

Now, Eventim, the official ticket seller in Israel, has updated their seating chart and it includes the PIT area… 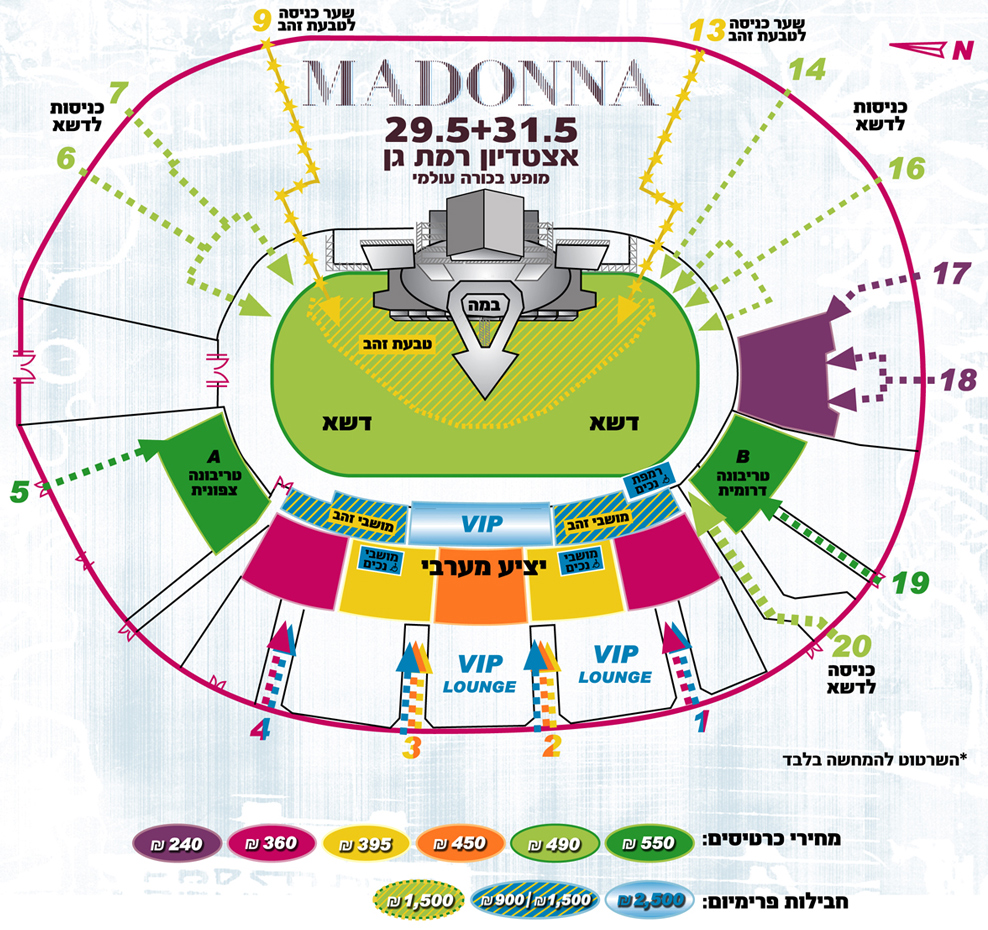 Stay tuned as more are to be announced!

UPDATE – 26 March 2012 – #2
After Birgmingham, another date has been added to the European leg of the Madonna World Tour. Melnitsa just confirmed Madonna will perform on August 4th at the Olympic Stadium in Kiev.

UPDATE – 26 March 2012 – #1
A lot of rumours the past couple of weeks, but it’s finally official!
Madonna will perform at the National Indoor Arena in Birmingham on July 19th.

Tickets to this newly added show will go on sale at 10am local time on March 30, while a devoted fan club pre-sale will start March 26 at Noon local time for Legacy members/1pm for Live Pass members.

UPDATE – 21 March 2012
The Madonna 2012 World Tour announced a second show at Ramat Gan Stadium in Tel Aviv on May 31st. The added show has been declared by Madonna as a “Concert for Peace.” Madonna is inviting several peace organizations to the May 31st show to honor and acknowledge people seeking peace in the Middle East. Celebrate with Madonna and fellow Iconers at this new show date!

UPDATE – 19 March 2012
Live Nation Italy just confirmed a new date for the European leg of the Madonna World Tour. Madonna will perform on 12 June 2012 at the Stadio Olimpico in Rome.

UPDATE – 12 March 2012
A new date has been added to the Madonna World Concert!
Fans will be happy to know that Madonna is set to perform at the Joe Louis Arena in Detroit on November 8th.

Tickets are $48-$173 and will go on sale at 10 a.m. March 19 through www.LiveNation.com, Ticketmaster and the Joe Louis Arena box office.

UPDATE – 9 March 2012
Promoters Adria Entertainment and Live Nation have confirmed today that due to logistical reasons Madonna’s concert, previously scheduled for 11 June 2012 at the Maksimir Stadium in Zagreb, has been cancelled

UPDATE – 5 March 2012 – #2
Madonna’s official website is happy to announce that a second show at Miami’s American Airlines Arena was just added to the 2012 Tour schedule and will take place on November 20th!

Madonna will perform on 18 October 2012 at the Pepsi Center in Denver.

A devoted fan club pre-sale will start tomorrow, March 6 at 10am for Legacy members / 11am for Live Pass members (pre-sales week #5). Also, please note that Live Pass registration for pre-sales week #5 is to be activated later today.

UPDATE – 29 Feb 2012
The Madonna World Tour has added another date to the European leg.
After two shows in Berlin, Madonna will perform a third time in Germany on 10 July 2012 at the LANXESS Arena in Cologne.
The general sale starts on 5 March 2012 at 9am (local time).

UPDATE – 28 Feb 2012
Following a record sell-out of her Abu Dhabi show on June 3rd and after a series of one-day sellouts in many of the major markets of Madonna’s tour a second and final concert – June 4th at the Yas Arena, Yas Island has been confirmed and will go on sale next Monday, March 5th, at midday from www.thinkflash.ae and select Virgin Megastore outlets in Dubai and Abu Dhabi (Mall of the Emirates, Dubai Mall and Abu Dhabi Mall).

A second show in Las Vegas on 14 October 2012 at the MGM Grand has also been added!
A devoted Icon pre-sale will start at 10am local time on February 28 (pre-sales week #4).

Madonna will perform on 25 October 2011 at the Toyota Center in Houston.
On 4 November 2011, she will also perform at the Xcel Energy Center in St. Paul.

UPDATE – 27 Feb 2012
A new date has been added to the North American leg of Madonna’s 2012 World Tour.
Miami fans will be glad to know that Madonna is set to perform at the AmericanAirlines Arena on Monday, 19 November 2012, in Miami.
Presales start on 28 February 2012 and the general sale is planned for March 5th.
(thanks TJK)

UPDATE – 23 Feb 2012
The first show of the Madonna World Tour in Barcelona on June 20th is sold out!
As previously reported on Madonna’s official website a second date has been added on June 21st at the Palau Sant Jordi arena in Barcelona.
Tickets for the general public will go on sale on 1 March 2012 with prices varying from 40€ to 175€.

UPDATE – 20 Feb 2012
Euro Entertainment, the Russian promoter of the Madonna World Tour, has released more details on the Moscow date at the Olimpiyskiy stadium on 7 August 2012.

The stadium has a capacity of 26,000 people and tickets range from 1750 RUB to 50,000 RUB.
Public sale starts on 1 March 2012, but tickets can be already be bought starting tomorrow through the ICON pre-sale.

We also got more information from FLASH Entertainment on the Abu Dhabi concert at the Yas Arena on June 3rd, 2012.
Tickets range from Dh250 to Dh1,095 and will go on sale at mid-day on February 27th, 2012.

Tickets and packages can be bought from www.thinkflash.ae and a limited quantity across select “Virgin Megastore” outlets in Abu Dhabi and Dubai.

Tickets to the June 7th show in Istanbul will be on sale February 24, with a devoted fan club pre-sale starting February 21 at 10am local time (pre-sale week #3).

Tickets to the August 7th show in Moscow will be on sale March 1st and a devoted fan club pre-sale will start at 10am local time on February 27 (pre-sale week #4).

Here is an overview of this weeks pre-sales…

UPDATE – 14 Feb 2012
The Madonna 2012 World Tour is the party of the year, and everyone around the world is invited. Following sold out shows in Seattle, New York, Washington DC, Amsterdam and Berlin, we are pleased to announce that second shows have been added to these fantastic cities! Icon ticket pre-sales begin this morning, February 14 @ 10am local times

Toronto also gets a second date on September 13, 2012 at the Air Canada Centre.
The public sale for Madonna’s concert in Amsterdam was this morning and sold out in less than half an hour! A second date has been added on 8 July 2012 at the Ziggo Dome in Amsterdam and tickets will go on sale on 18 February 2012.

US fans interested in VIP packages can order them HERE!