Rebel Heart Tour DVD, Blu-Ray and double-CD to be released on 15 September 2017

Madonna has also announced a new live album featuring 22 songs from the Rebel Heart Tour, available on double-CD and digital download, as well as the concert film via DVD and Blu-ray with bonus content. 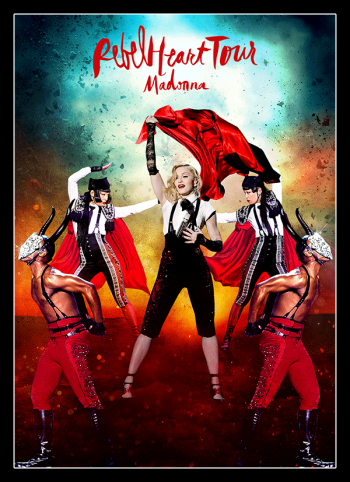 Here is the full press release…

As the top grossing touring female artist in the history of Billboard, Madonna sure knows how to draw a crowd. Her record-breaking Rebel Heart Tour showed the Material Girl at the top of her game, taking her on a whirlwind tour of 55 cities across four continents over the course of seven months.

Luckily all of Madonna’s signature visual theatrics, extravagant costumes and awe-inspiring choreography were captured on film for the concert documentary, Madonna: Rebel Heart Tour, which initially aired on Showtime and now will be available on DVD for the first time on 15 September.

Co-directed by Danny B. Tull and Nathan Rissman, the film was recorded around the world and features both live and behind-the-scenes material, as well as previously unreleased footage culminating with performances at the Sydney Qudos Bank Arena in Australia in March of 2016.

The Queen Of Pop has also announced a new live album featuring 22 songs from the Rebel Heart Tour, available on double-CD and digital download, as well as the concert film via DVD and Blu-ray with bonus content.

The tracklist for the film and live concert album spans all decades of her illustrious career, including songs from her chart-topping Rebel Heart album to new interpretations of her classic fan favourites and timeless hits. The tour itself grossed $169.8m with 1,045,479 in attendance and reaffirmed Madonna’s pop culture dominance. Popcrush described the spectacle of the Rebel Heart Tour thusly:

“The concert is a massive all-out explosion of song, dance and depravity with vague social commentary, proving for the umpteenth time that Madonna is, was and truly always will be the Queen.”

Madonna has made a career pushing boundaries and testing the limits of what artists can and cannot do. For the Rebel Heart Tour she pulled out all the stops, whether it’s playing a Flying V for ‘Burning Up’, singing Edith Piaf’s ballad ‘La Vie En Rose’ in French or doing intricate choreography in full samurai gear, the unstoppable renaissance woman shows us all of the “blood, sweat and tears” that goes into just being Madonna.