Madonna gets involved in the Rebel Heart Tour makeup drama

Both Brooke and Henrikson have been throwing shade at each other on social media for the past few weeks, and now Madonna is getting involved on Instagram.

Gina Brooke started working with Madonna on the Re-Invention tour and was responsible for the majority of her looks uptil 2014. This includes the MDNA Tour, Sticky & Sweet Tour and of course, the incredible Confessions era. 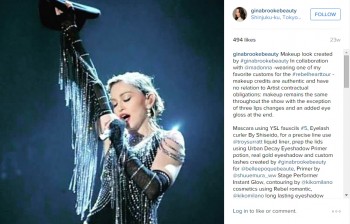 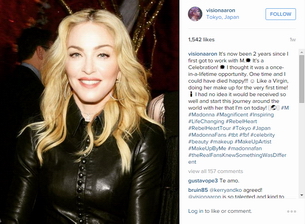 This is also my work @ginabrookebeauty you did not apply her make up for this or any of the tour. Please stop taking credit for all my hard work.

@visionaaron did you not read my post entirely?
“Look created” – I created this look and trained you how to do it remember?
Not only on tour but months before hand… What I should have done was focus on teaching you how to properly do a feline flick… my mistake!

Some comments have already been removed or modified, but here’s an original screengrab… 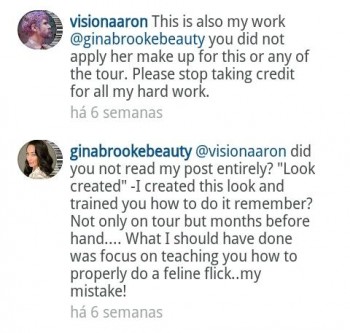 It didn’t stop there… When Madonna’s hairstylist Andy Lecompte posted an Instagram picture of Madonna and Sean Penn at the Help Haiti Home Gala, one fan “lgog” commented that Madonna was wearing “tranny make up”.

Aaron Henrikson alleged that Gina Brooke put “lgog” up to it…

I know you are good friends with @ginabrookebeauty lol.
I’m sorry you feel the need to be so petty and desperate. Though we know who put you up to it. 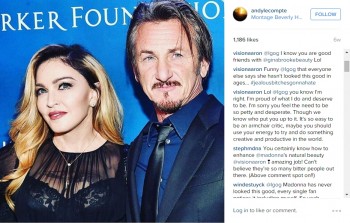 @lgog: Why does everyone keep mentioning Gina Brooke. This was entirely my opinion and NOTHING to do with her. You seem to forget that she has supported you, trained you, taught you how to succeed in your new role.
Gina has been incredibly supportive of Aaron and went out of her way to make sure he was prepared for the tour. You can disagree with me and resent my comments but please don’t pull Gina into this disputed. She is not involved in any way.

@VisionAaron: Lol because you know you are her lapdog @lgog Why did you delete your petty bitter posts? Probably because she saw them backfire. I have been nothing but polite and diplomatic when asked about her but she has continued to misrepresent the truth and post pictures of my work as her own. She NEVER even once applied M’s make up during rehearsals. After I had already been doing M’s show make up, she was asked to consult for a few days on lighting and the quick change (where she did blot and powder my make up one day in the quick change). I understand that she must feel possessive after working with M for so long. She must feel left out while we are on tour and no longer being first choice, but it’s wrong for her to try and take credit for my hard work, to ask her friends to criticise it, or for her to whine because my aesthetic is different from hers. She’s had her time to do her thing. I’m sorry if you don’t like what I do, I’d suggest you work your ass off to get to where I am so that you can have a chance to do things your way.

@lgog: I’m not her lapdog let me reiterate she has nothing to do with my comments. We all know that Gina trained you months in advance. You seem to be repeating a pattern – you told everyone that @patmcgrathreal doesn’t apply her own makeup and now you are doing the same about Gina. You seem to have an issue with industry icons. Gina has always set the look for the tour and if she wanted to be in the road, truth is you wouldn’t be there. Good thing your a junior artist and cheap.

@VisionAaron: That lgog troll is Gina’s friend who she’s telling to write negative things since she blocked me after I called her out on taking credit for my work.

It seemed to end there, but two weeks ago Gina Brooke claimed that she created Madonna’s look for the Rebel Heart Tour in an interview for Thailand’s The Nation…

The look comes from a process of collaboration among Madonna, myself, the hairdresser and the other stylists.
I don’t do the whole tour, but I train the makeup artists and set the looks. I come in for different countries and make sure everything is working.

[I like the final segment best.] It’s like the 1930s, because she wears a sort of flapper dress. So I made eye shadow out of real gold for her and apply it to her lips as well, with a bit of eight-hour cream on top to make it glossy. I love that era and she wears it very well.”

Aaron Henrikson laughed it off, but hit back hard…

Funny, yet not-so-funny things in that “interview” is that she says she comes to some shows to supervise my work or something….when she really comes on vacation for her son to visit his father (who is part of tour staff) and she is not working at all and has absolutely no official input or say over my make up!
Another “funny” thing in that “interview” is she thinks the forth section is inspired by the 1930’s…duh…it’s inspired by the 1920’s, you’d think that’s kind of basic and important! 🙂 if she’s going to lie, she should at least do her homework! 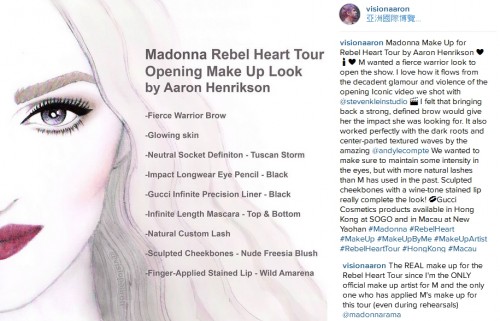 Finally, Madonna decided to step in and posted the following on Instagram..

To be clear……. The make up for my tour was created and set by make up artist Aaron Henrikson @visionaaron. Good to have the facts and share then in the nicest way possible! #rebelheartour photo by Joshua Brandao 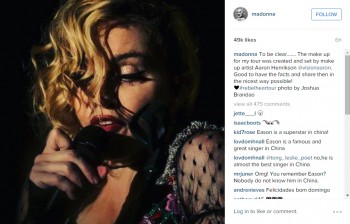 At Madonnarama, we believe that Madonna’s make-up has been particularly flawless for the past two years. Let us know what do you think?