Update: Outtakes from the exclusive Us Weekly chat with Madonna

Us Weekly: In the spirit of rebel hearts, what was your ultimate “rebel” moment?

Madonna: The ultimate moment where I most felt like a rebel was in St. Petersburg, Russia [in 2012 during the MDNA Tour] when I was told they were going to arrest anyone who was openly or obviously gay and they came to my shows and I spoke out against the government. Eighty-seven people were arrested and I was fined like $1 million. They dropped the lawsuit, though. When I stood up for Pussy Riot was around the same time, but there have been a lot of those moments. I also think about when I was in Toronto and they said if I simulated masturbation during one of my shows [during the Blonde Ambition Tour in 1990] they would have me arrested and I was like, ‘F–k you! I’m doing it anyway. So arrest me.’ They didn’t in the end. Lots of those. Then there’s the Vatican when they said they would have me…you know, whatever! It goes on and on….

Us Weekly: Love the track on the album “Unapologetic Bitch” — so, who’s the biggest unapologetic bitch of them all?

Madonna: Kanye West is the biggest unapologetic bitch besides me.

Us Weekly: Anyone you’d like to apologize to, though?

Madonna: If I could apologize to one person, it would be…no one. I’m an unapologetic bitch!

Us Weekly: With two marriages and other high-profile relationships behind you, what’s your best relationship advice?

Madonna: My best piece of relationship advice is you can’t take it with you.

Us Weekly: You have so many classic, hit songs in your catalog — but do any other artists’ songs make you envious?

Madonna: I wish I had written and recorded a song called “Retrograde” by James Blake. I love him.

Us Weekly: What’s one of your biggest pet peeves?

Madonna: I can’t stand when I walk into a room and everyone’s not talking to each other and just on their phones.

Madonna: My favorite workout is metabolic interval training on a Bosu Ball.

Us Weekly: What’s your favorite part about being a mother?

Madonna: The best thing about being a mom of four [Lourdes, 18, Rocco, 14, David and Mercy, both 9] is all of the life lessons they teach me all day long, every day of the week.

Us Weekly: What are the ultimate perks and downfalls of fame?

Us Weekly: What’s your favorite book of all time?

Madonna: I’m obsessed with so many books that it’s impossible to name them all but I really love The Glass Castle by Jeannette Walls. So good.

Madonna: My favorite scene that I ever filmed was singing “Don’t Cry For Me Argentina” from the balcony of the Casa Rosada in Argentina [where the real Eva Peron once stood] during Evita. That was amazing. SO real and surreal. Bizarre.

Madonna recently chatted with Us Weekly’s Entertainment Director Ian Drew for an extended interview about her legacy, her romantic past, her kids, her famous friends (including her crush, Drake!) and much, much more. Read this very special edition of 25 Things You Don’t Know About Me now! 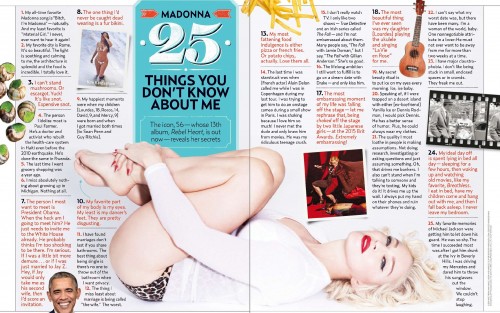 1. My all-time favorite Madonna song is “Bitch I’m Madonna” — naturally. And my least favorite is “Material Girl.” I never want to hear it again!

2. My favorite city is Rome. I’s so beautiful. The light is soothing and calming to me, and the architecture is splendid and the food is incredible. I totally love it.

4. The person I idolize most is Paul Farmer. He’s a doctor and activist who rebuilt the health-care system in Haiti even before the 2010 earthquake. He’s done the same in Rwanda.

5. The last time I went grocery shopping was a year ago.

6. I miss absolutely nothing about growing up in Michigan. Nothing at all.

7. The person I most want to meet is President Obama. When the heck am I going to meet him? He just needs to invite me to the White House already. He probably thinks I’m too shocking to be there. I’m serious. If I was a little bit more demure…or if I was just married to Jay Z. Hey, if Jay would only take me as his second wife, then I’d score an invitation.

8. The one thing I’d never be caught dead wearing is a fur bikini.

10. My favorite part of my body is my eyes. My least is my dancer’s feet. They are pretty disgusting.

11. I have found marriages don’t last if you share bathrooms. The best thing about being single is there’s no one to throw out of the bathroom when I want privacy.

12. The thing I miss least about marriage is being called “the wife.” The worst.

13. My most fattening indulgence is either pizza or french fries. Or potato chips, actually. Love them all.

14. The last time I was starstruck was when [French actor] Alain Delon called me while I was in Copenhagen during my last tour. I was trying to get him to do an onstage cameo during a small show in Paris. I was shaking because I love him so much! I never met the dude and only knew him from movies. He was my ridiculous teenage crush.

16. The lifelong ambition I still want to fulfill is to go on a dream date with Drake — and only kiss him.

17. The most embarrassing moment of my life was falling off stage — let me rephrase that, being choked off the stage by two little Japanese girls — at the 2015 Brit Awards. Extremely embarrassing!

18. The most beautiful thing I’ve ever seen was my daughter [Lourdes] playing the ukulele and singing “La Vie en Rose” for me.

19. My secret beauty ritual is to put ice on my eyes every morning. Ice, ice baby.

20. Speaking of, if I were trapped on a desert island with either [ex-boyfriend] Vanilla Ice or Dennis Rodman, I would pick Dennis. He has a better sense of humor. Plus, he could always wear my clothes.

21. The quality I most loathe in people is making assumptions. Not doing research, investigating or asking questions and just assuming something. Oh, that drives me bonkers. I also can’t stand when I’m talking to someone and they’re texting. My kids will do it! It drives me up the wall. I always put my hand on their phones and ruin whatever they’re doing.

22. I can’t say what my worst date was, but there have been many. I’m a woman of the world, baby. One nonnegotiable attribute in a lover: He must not ever want to be away from me for more than two weeks at a time.

23. I have major claustrophobia. I don’t like being stuck in small, enclosed spaces or in crowds. They freak me out.

24. My ideal day off is spent lying in bed all day — sleeping for a few hours, then waking up and watching old movies, like my favorite, Breathless. I eat in bed, have my children come hang out with me, and then I fall back asleep. I never leave the bedroom.

25. My favorite memories of Michael Jackson were getting him to let down his guard. He was so shy. The time I succeeded most was after I got him drunk at the Ivy in Beverly Hills. I was driving my Mercedes and dared him to throw his sunglasses out the window. We couldn’t stop laughing.