Bustier Designer Shady Zeineldine: Madonna is everything for me

Madonna’s “Living for Love” video, which was released today on YouTube, features an embellished nude bustier by the Lebanese designer Shady Zeineldine worn for most of the dance sequences. The piece is a masculine-feminine mix of corsetry and a tuxedo-like top. The sort of tight, sexy, gender-bending thing we’ve come to expect from the Queen of Pop. 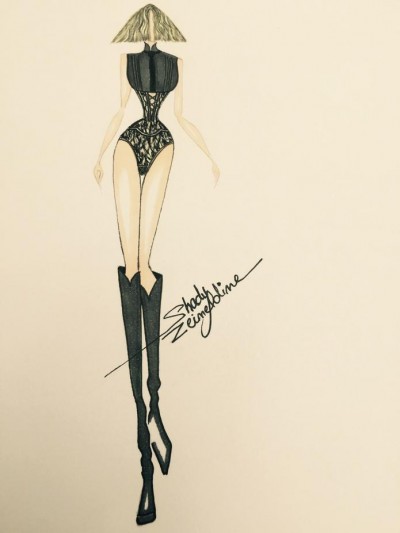 I’m a longtime, big fan of her. She’s everything for me.
I tried to do something matador-inspired but with a touch of femininity, something more delicate. I used many kinds of lace and [decided on the] nude color for the lining to show her sexy body.

The collaboration came about through Madonna’s longtime stylist, B. Akerlund, and Zeineldine’s public relations team. After visiting the designer’s press showroom in Los Angeles, Akerlund requested he send sketches for the video. Madonna and her team then sent a brief of matador references (presumably including Dolce & Gabbana’s Spring collection) and he was given free rein to design.
After a couple of months of re-sketching and getting approval from Madonna’s team, the deal was sealed.

He’s also made a few other pieces for Madonna, but even he won’t know until she takes the stage if they’ll be worn.

In case you missed it, here is Madonna’s latest video…