Taking a night flight with Madonna!
Matthew Aidan was on the same “New York – London” flight as Madonna a few days ago and posted the following pictures on Instagram… 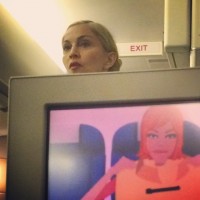 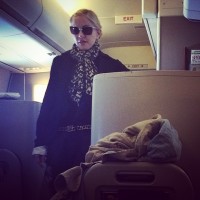 Another picture from Madonna at JFK Airport, New York… 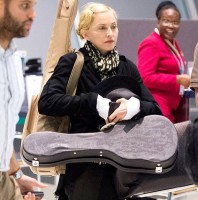 In the 1980s, many people were using the AIDS epidemic as an excuse to perpetuate homophobia. Madonna was one of the first mainstream figures who spoke out in defense of the gay community at this time. She got involved in the fight against AIDS, encouraging research and the practice of safe sex. She brought vogueing—a style of dance started in New York’s gay club scene—to the mainstream and featured footage from a gay pride parade in her tour documentary, “Truth or Dare.” She also featured gay, lesbian, and bisexual affection in “Truth or Dare,” the “Justify My Love” video and her “Sex” book. This was still in the early 1990s, before it was a trendy thing for female pop stars to do. More recently, Madonna has spoken out against bullying, anti-gay laws in Malawi and Russia, and the Boy Scouts’ anti-gay policy. Madonna’s advocacy for the LGBT community was acknowledged when gay news magazine, “The Advocate,” named Madonna “the greatest gay icon” in 2012.

There you have it. From the eighties to nineties to now, LGBT representation in music has a long history. Whether they’re a pop icon or an unknown independent artist, these artists have used their position to help make progress for LGBT people. They have risked their own popularity to stand by what they believe in. And that is what makes these artists so admirable.

People will say that “Ray of Light” was kind of [William Orbit’s second album] “Strange Cargo” with Madonna on top. I dispute that by the way, but I’ve heard it said. Clearly, my sound and her sound fused together. People maybe attribute some of that sound purely to me, whereas in fact the two of us created “Ray of Light”.

Listen to the full interview at echoes.org

Want to hear more about his collaboration with Madonna, then don’t forget to check out his interview with hungertv.com

“@Lorena_MDNA: @montepittman what do you think of Madonna's upcoming album?” What I heard was awesome!

Madonna is consistently brilliant. When she hits her sweet spot, it is the music equivalent of orgasm. Moments like Holiday, Into the Groove and Hung Up are prime examples. Reckless abandon on the dance floor yet not throw-away gibberish.
[…]
Some might argue her last studio album MDNA was a disappointment. I actually loved many moments on the album but there was a sense, right before the album dropped, that something was out of alignment.
[…]
She had a clothing line, a world tour, a film and a perfume to promote. Music – the source of all her power – had been relegated to a mere portion of her time, a part-time job and unfortunately something had to give.

Read the full article at attitude.co.uk

Why did Tori Amos Cover “Frozen”?
Talking to the Huffington Post, Tori Amos explained why she performed a cover of Madonna’s “Frozen” during her concert in Amsterdam…

This girl had been asking me for it and asking me for it and asking me for it and I’d been thinking, OK. Yeah. Let me get my head around it. And then she told me in a different city that she had a muscle issue she was dealing with and all of a sudden the poetry lined up. She is so beautiful — so beautiful — and I’m not talking about on the inside, she’s stunning. She’s a looker. And you wouldn’t realize that she’s going through this and all of a sudden the muses said to me “the muscles are frozen.” From that moment, the song was for her. She was bringing her parents that night in Amsterdam and it all came together at soundcheck and I told the crew, “Let’s work this out.” She had been to a few shows and sometimes when the young ones come out, I don’t know if they’re leaving school to come or what but I don’t want their parents to think I’m [cult leader] Jim Jones because that isn’t my thing [laughs]! I’m not handing out space cakes to people at the stage door… you see what I’m saying. So I wanted the parents to also feel like their daughter’s request was being met. But I had no idea people would respond to it. I didn’t have a way in to “Frozen” until it all came together with why she was asking me for that but she told me afterward that she hadn’t been asking me for it for that reason.

I think it’s awesome for her to help, being as big as she is. The people who get the help she provides will probably shed tears.
[Other successful Detroit natives] should do as much as they can. It’s where they came from, and it’s ot a great situation right now.