In Brief: Like a Prayer, Billy Eichner, L’Wren Scott, Rejection Letter and more… 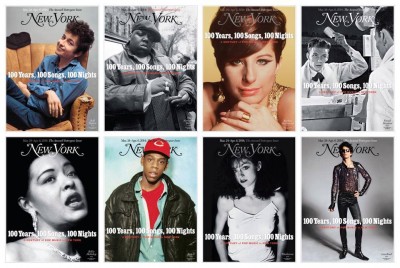 Celebrating “Like a Prayer” 25th anniversary
If you are a member of Madonna’s official fan club, make sure to enter the special contest for a chance to win a signed copy of the lithograph (please note that the contest is open to all members of Icon)!

Madonna’s ‘Like a Prayer’ at 25: Classic Track-by-Track Review by Billboard

Madonna about L’Wren Scott
L’Wren Scott, a high-end fashion designer best known as the longtime girlfriend of Mick Jagger, has died in what was being investigated as an apparent suicide.

This is a horrible and tragic loss. I’m so upset. I loved L’Wren’s work and she was always so generous with me.

What song should they play at your funeral?
Oh god, this is a tough one… I’m a big Madonna fan.

Have you ever done a choreographed dance from a music video?
I actually did a segment with Madonna for “Conan,” and a part that didn’t make it in is when she forced me to learn the opening number with her dancers. All her male dancers wear these high-heeled diamond-encrusted shoes, and they made me get in the shoes and learn the opening number. It didn’t quite gel with the other stuff, so we didn’t put it in, but that was the last choreographed dance that I learned.

Madonna rejected
The website Mental Floss posted various rejection letters sent to some of the world’s most famous people, including Madonna… 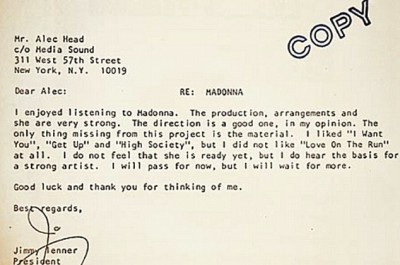 Letter from musto: Madonna
American journalist and a former columnist for the The Village Voice Michael Musto wrote an open letter to Madonna and wasn’t very kind to her…

Hello, Madge. I feel I can talk to you in a rather intimate manner since we know each other really well. Well, maybe not that well. But in the early 1980s, shortly before you made it, my band shared a bill with you in a downtown New York club, as is known to viewers of every Behind the Music-style show in history. I was irked by the fact that we never got to soundcheck, because you adorably took so long doing yours. Furthermore, your manager didn’t want us to greet friends in our shared dressing room, because you were getting ready and desperately wanted privacy. Gosh, I had no idea you were so coy and demure! Anyway, even pre-Madonna, you were a bit of a prima donna, and I was convinced that this wacky attitude meant you were going absolutely nowhere. O.K., sometimes I’m a little off-base.

The fact is you kept evolving and growing and turning videos into art forms and in the process became the biggest music force of the decade to come and then some. And your tunnel vision no doubt helped you as you kept sucking up the culture and artfully belching it back out while knocking down everything in your path. What’s more, you were an important figure in celebrating gay culture as well as propagating female empowerment, all with great clothes and makeup.

Well, jump forward, and you’ve managed to stay relevant, even in an industry where older women are generally frowned upon and discarded. You had the biggest tour of last year, reaping in a whopping $305.1 million, and I must admit you’re still talked about and tweeted about as if you were 24. And a half.

But at what price, Madge? For one thing, that Grammy outfit! You looked like latter-day Mae West impersonating Colonel Sanders. And those teeth might look good on Lil Wayne, but not on the grand dame of 1980s pop. Are you wearing your gold records in your mouth to prove you have them?

And while staying in touch with the new kids is one thing, I feel you overly obsess on younger acts as a way to keep a fresh allure about yourself. Whenever a new star explodes, everyone starts wondering how long it’ll take before Madonna suggests some kind of love duet. You almost wrecked Britney’s career with that bomb twosome, but then you did get juice from Justin Timberlake for one of your last hits. And at the Grammys, you made an appearance with the red-hot Macklemore, Ryan Lewis and Mary Lambert, mercifully hopping on a pro-equal-rights bandwagon, as opposed to the time you sold everyone down the river by claiming Eminem’s not hateful at all!

Just days later, you were prancing around for an MTV taping with Miley Cyrus, sticking out your tongue and swallowing whatever heat you can get from her. At least it must have taken your mind off Lady Gaga and the way you feel the horrible wretch has ripped you off—and worse, wouldn’t duet with you.

You’ve also been accessorizing yourself with your offspring in public, managing to come off both maternal and like one of the kids. Lourdes was becoming quite the collaborator, but at the Grammys, it was 8-year-old David on your arm. (Did Lourdes get too old, lol? Or maybe when that video of her high school musical proved she had an amazing voice, you felt a tiny bit threatened. If so, it’s perfectly understandable. Let’s not forget that Judy Garland pushed Liza toward stardom, then had a breakdown when she got there.)

But it’s 13-year-old Rocco who has nabbed you the most headlines lately.

There was that picture of him and his friends holding booze bottles—an even weirder free commercial than when you endorsed Eminem. And on Instagram, you used a version of the N-word to describe Rocco, later apologizing and saying you intended it as a term of endearment. Mighty white of you.

My best advice to you would be to stop fearing the aging process and simply embrace it, while appreciating your own stature and wisdom. You’ve done amazing things and should enjoy the glow of achievement, while segueing into activities that won’t put you on the same playing field with teens. If stretching the boundaries of what mature people can do ever becomes tiring, feel free to do something old. Have an age-appropriate boyfriend. Do a tribute album to Peggy Lee. Take out those teeth. Just don’t have a Madonna Film Festival, lol.

Shift won Art for Freedom competition
Shift, a joint project between, was chosen as the the “Art for Freedom” grant winner for the month of February.