The “new” Valley of the Dolls, will have a decidedly different “spin” on the original with L.A.’s music business being a big part of the story, particularly with the Neely O’Hara character (Patty Duke) the up and coming star who makes it big and has a major fall from grace. One of the writers of the new VOTD is Paul Rudnick, who did the “First Wives Club” and “In and Out” (such a funny Kevin Kline movie!) There will be a dark comedy aspect to the film.

Poll: Which GRAMMY Awards Performance Are You Most Excited For?
Billboard is currently hosting a poll to find out which Grammy Awards performance people are most excited for.
Go and vote HERE

Madonna Rumored To Be Playing Amnesty International Concert In Brooklyn
According to the Gothamist, a daily weblog covering New York city’s news stories Madonna will perform at the massive Amnesty International concert at Barclays Center on February 5th that will feature two members of Pussy Riot, who were just released from Russian prison camps last month.

There are so many artists who inspired me while I was growing up, it’s far too difficult to pick one. Two albums I listened to a lot that immediately stand out are Madonna’s Like A Prayer and Michael Jackson’s Bad – I definitely grew up on both those albums and remember a time when I would play nothing else.

New items added to the Official Madonna Store
To start 2014, the official Madonnna store has added some fresh exclusive items, including a Revolution of Love zipped hoodie (a portion of the sale of this special design is going to support Madonna’s Ray Of Light Foundation), a limited edition white gold plated «M» charm necklace, and an Iconers Exclusive limited edition white gold plated MDNA charm necklace.

Check it out at the Official Madonna Store 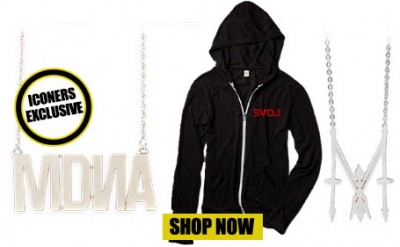 Monte Pittman talks Madonna
To promote his new album The Power of Three, which has been release today, Monte Pittman gave an interview to Paul Robinson for The Moaning Times and talked about Madonna…

The Moaning Times: Monte can you tell us how you went from wanting to be a musician to supporting madonna on tour and what would you say to anyone who has a dream like yours?

Monte Pittman: I started giving her guitar lessons and from there she asked me to come on tour and play guitar for her. I would say to anyone who wants to do this that persistence is how a lot of people have done it. I’ve always said “it’s bad luck to turn down a gig”. Just because you may not like the music, you never know who you are going to meet in the process. Don’t give up and keep yourself versatile.

Dog dances to “4 Minutes” by Madonna