Australian Michael Griffiths’ IN VOGUE: SONGS BY MADONNA is coming to London this week!

The show will be at the St James Theatre in London from Thursday 19th to Sunday 22nd December 2013 and we got two double passes to give away!

Want to win?
Just send us an email at [email protected] with “In Vogue: Songs by Madonna” as the subject line. Also include your name and city you currently live in.

The first two participants will each receive a double pass to the “Opening Night” show on Friday December 20th at 19h45. Please make sure you’re able to attend before entering the contest! 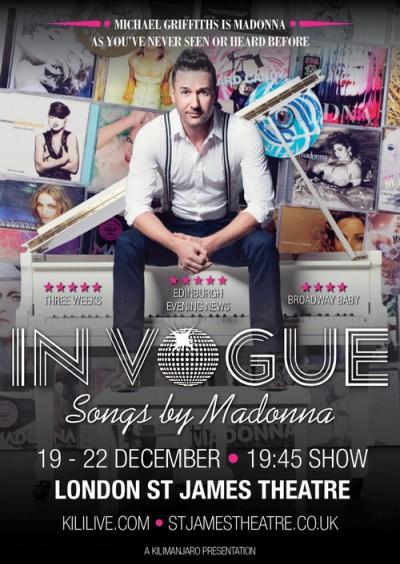 It’s not just a conventional ‘tribute’ show as it doesn’t include dressing up as Madonna.
The focus lies more on what an extraordinary songwriter Madonna is.
A celebration of her career and her success.

The smash hit cabaret IN VOGUE: SONGS BY MADONNA, a 5 star sell-out smash at this year’s Edinburgh Fringe comes to London for four shows only. Australian Michael Griffiths IS Madonna as you’ve never heard or seen her before. No accent, costume or wig. Just ‘Madge’ accompanying herself at the piano, leading you on a journey through her tough life and tender songs.

For more details and tickets, check out www.stjamestheatre.co.uk

Thanks to Michael Griffiths