Madonna and contender for the papacy related ?
Canadian Cardinal of the Catholic Church Marc Oullet, who was one of the top contenders to be pope, is a distant cousin of Madonna, Céline Dion and Justin Bieber according to perche-quebec.com.
He shares 307 kinship relations with Madonna, 647 with Céline Dion and 350 with Justin Bieber. 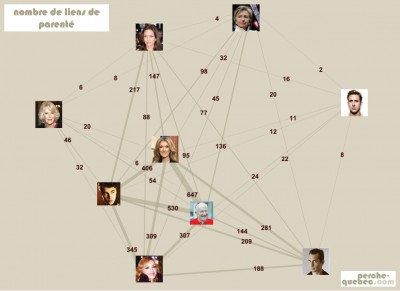 Fire escape over my old apt over Manganaro’s #1980’s 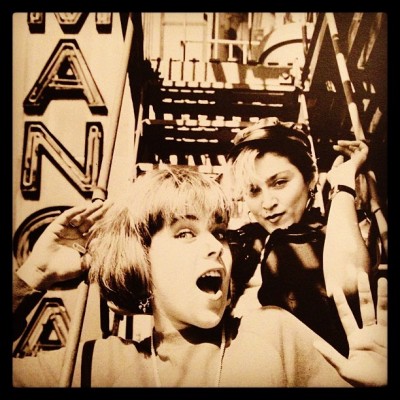 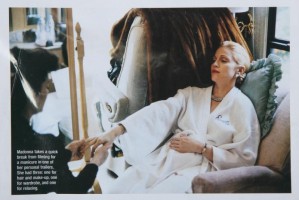 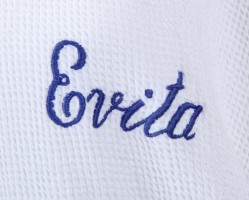 Evita Military Hat
An army green military hat worn in Evita (Hollywood Pictures, 1996). The hat has a red band and is embellished with gold trim and detailing with a center front badge and small gold metal circle in the colors of the Argentinian flag. A label reads “Angels & Bermans.” Size 7 1/8. Accompanied by a prop TIME magazine with Madonna and Jonathan Pryce on the cover as Evita and Juan Peron and a copy of the film. 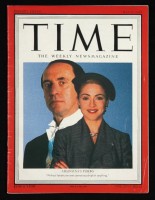 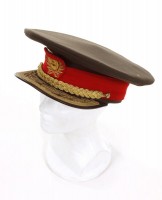 Madonna sued over Vogue
Back in July 2012, a Delaware company hit Madonna and her label WB Records with a lawsuit claiming she stole portions of one of their songs for her hit 1990 hit “Vogue.”

The portions of ‘Love Break,’ which have been copied into ‘Vogue’ and all its various ‘mixes,’ ‘remixes,’ videos, YouTube versions, etc., are numerous but intentionally hidden. The horn and strings in ‘Vogue’ are intentionally sampled from ‘Love Break’ throughout.

The unauthorized sampling was deliberately hidden by [Madonna] within ‘Vogue’ so as to avoid detection. It was only when VMG specifically looked for the sample, with the technology available to it in 2011, that the sampling could be confirmed

The company also says music producer Richard “Shep” Pettibone facilitated the process by altering the samples after he was originally hired by VMG to remix “Love Break,” later working on “Vogue.

A June 18 Los Angeles trial date is set to determine if Madonna should pay for horn and string samples used on her 23-year-old dance hit “Vogue.”
The plaintiff is seeking unspecified damages, plus all profits made from sales of “Vogue.”

Little Monsters going at it again…
After GLAAD announced Madonna was going to present Anderson COoper with the Vito Russo Award, fan blog Little Monster Artpop (which has now been deleted) posted the following Letter…

It has come to the attention to Little Monsters everywhere that you are letting Madonna give an award to Anderson Cooper. Not only is this an insult to a true gay rights activist like Lady Gaga, but it insults every gay man and woman on this planet.

Madonna is one of the major reasons for AIDS. Back in the 1980’s, she encouraged gay men to have unprotected sex. While she certainly didn’t start the disease, she and her lack of morals helped it spread.

Please rethink your choice of having Madonna as a presenter. If you don’t, we Little Monsters will strike back in a way you won’t like.

Madonna told her fans that it was okay to go out and screw anybody and anything…Many gay men listened to her, had unsafe sex, and contracted AIDS. They died. They were so stupid to listen to such a slut that their death was karma.

An interesting point of view by Michael Antohny Fernandez…

The funny thing is that around the same time, when there was nobody to look up to as a gay role model, or even any real straight allies, I found someone I could relate to: a beautiful, irreverent and talented artist who sang of dancing and taking holidays, of leaving all your troubles behind, and so I did, as silly as it sounds. Madonna was my generation’s beacon of hope. She befriended gays and preached tolerance when it was not the popular thing to do. She rallied to raise money and awareness for HIV/AIDS when even the president of the United States would not utter the word “AIDS” publicly.

Read the full article at the HuffingtonPost 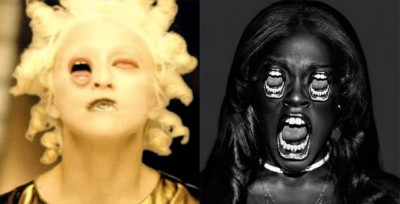 Azealia Banks released the cover of her latest single “Yung Rapunxel”, some might say she was inspired by Madonna’s Bedtime Story video, other say, just like Madonna and Mark Romanek, she was inspired by different female surrealist painters.
More at NewNowNext

Surprise Party in Brooklyn
Madonna shocked diners at a Williamsburg restaurant when she arrived for one of her dancers’ birthdays. The scene was gourmet Antica Pesa, where the Material Girl was seen — with her kids Lourdes and Rocco in tow — dressed down in a hat and glasses and wearing leather gloves. After a birthday cake dessert, the dancers had the staff close the restaurant’s curtains and make a dance floor for them. “They started showcasing some of the moves from their MDNA tour,” said a gobsmacked spy. “The staff quickly moved the tables out of the way to turn the dining area into a dance floor, which got everyone clapping and cheering, including Madonna, who watched from a table.” Tom Hardy of “The Dark Knight Rises” was also at the Brooklyn outpost of the Rome eatery and looked as surprised as the rest of the customers, a source said. Madonna’s group tried to persuade Rocco to join them, but he refused. After cutting a rug to Madge tunes including “Music,” the dancers “took a bow and hugged their boss, who approved like a proud mother.”
Source: NYPost

I absolutely love all things 80s and jumped at the chance to recreate my favourite Madonna photo of all time. Going all out for the eighties is a brilliant way to raise money, so all those eighties fans who can’t wait to get out the lace gloves and leg warmers should get sponsored for Red Nose Day while they’re at it! 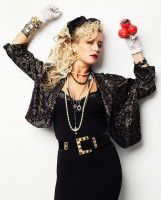 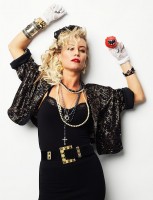 The show, which comes from the Montreal Museum of Fine Arts, opens in the UK in April 2014 as part of an international tour but will be adapted for the Barbican. 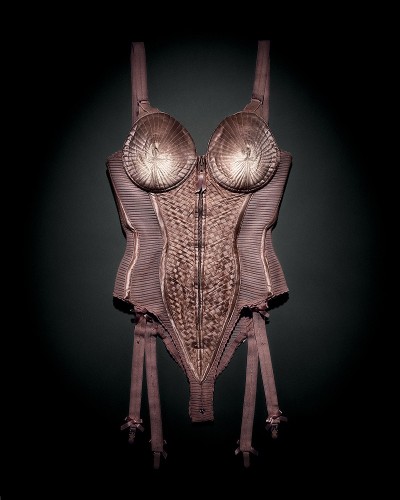 I am super excited that the show is coming to London … I always want to go to London, because London, for me, is a special place.
In England I’ve got so many souvenirs and I’ve had so many experiences and I must say that the English were the first ones to come to my shows and appreciate my fashion.
If there is one place other than Paris that I should like to live in, it is London. I’ve got so many connections with London and feel at home there, even sometimes more than Paris.

It’s an honour for me because [the Barbican] is a wonderful gallery and a wonderful place with extraordinary architecture and I think that showing my work there will be beautiful. 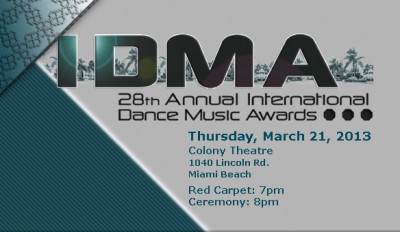 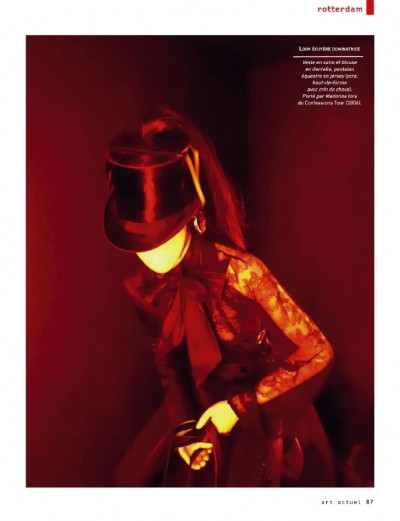 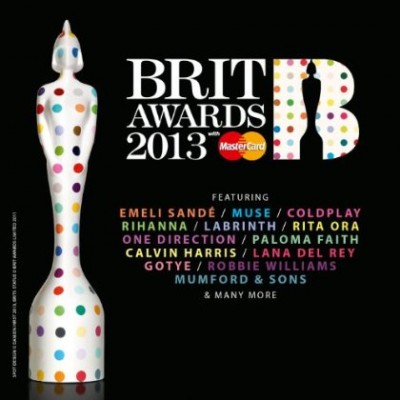 Music Week has published a special brochure celebrating the BRIT Awards’ 15-year association with MasterCard, which you can read online now. 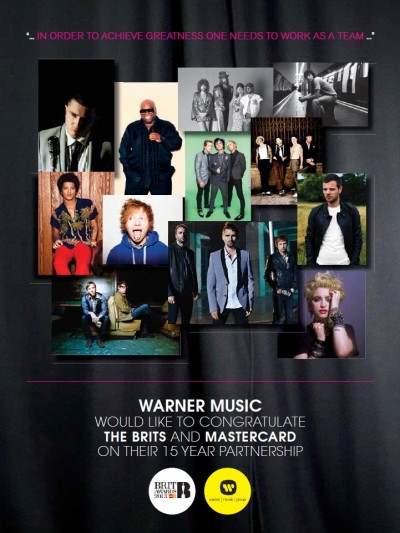 The Party
According to ContactMusic, John Travolta – who earned an Oscar nomination for his role as disco lover Tony Manero in the 1977 film – wowed an A-list audience by showing he’s still got the moves as Bee Gees hit ‘Stayin’ Alive’ played at the bash following the Academy Awards on Sunday (24.02.13).

At the ’91 Oscars, Billy Crystal introduced Madonna’s performance of the “Dick Tracy” song “Sooner or Later” as “the NC-17 portion of our really big show.” Turns out the number wasn’t nearly as risqué as some of Madonna’s other award-show routines, but as usual, she commanded everyone’s attention with a sultry, full-stage romp. Donning a Marilyn Monroe-inspired gown, fur boa, gleaming baubles and bleached-blonde curls, Madonna gave a performance that took us back to the glamorous days of old Hollywood.

Why We Should Thank Our Lucky Stars For Madonna

Read the full article at LGBTicons