“Dick Tracy” (1990) has finally received the home video release it deserves, arriving this week on Blu-ray. You can order it at Amazon.com

Disney and star/director Warren Beatty have been duking it out over legal rights practically ever since it first came out, which kept the film — which was a major blockbuster and won several Oscars — from being as widely circulated or well-remembered as it probably ought to have been. 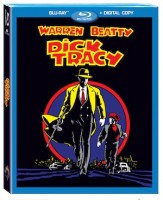