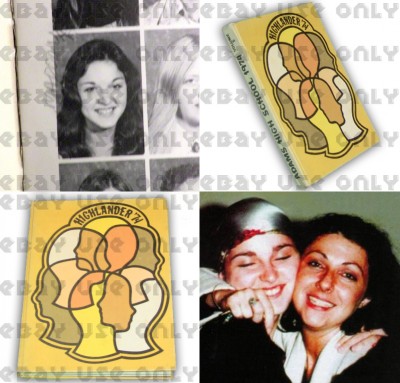 40 years ago, global superstar Madonna was an ambitious 15-year-old high school cheerleader, dancer and local Rochester, Michigan beauty. Now is your chance to own a very special piece of memorabilia from that time.

Being sold by Ondina Massot is a 1974 Rochester Adams High School yearbook with an astounding five photos of the Queen of Pop from when she was a sophomore in high school, and featuring her signature next to her class photo.

To die hard fans, Ondina’s photos with Madonna represent a special friendship the icon had during a unique span of time from when she was only 15 and in high school up until her infamous move to New York to become the legend we all know today.

Ondina taught Spanish at Adams High that school year (1973-1974) and even had Madonna’s brother, Christopher Ciccone as a student at Van Hoosen Junior High. She became friends with Madonna during that time and would maintain that friendship for several years afterward.

The book is in great, if not mint, condition and the 40-year-old Pop culture treasure will be sold in a 7-day eBay auction from December 7th at 12 Noon PST to December 14th at http://myworld.ebay.com/madonnayearbook