MDNA back in the charts
Madonna’s MDNA album re-enters on Billboard Top 200 at #140 and it’s at #7 on the Dance Electronic Albums (greatest gainer of the week).

Madonna had an extra special surprise for one of her biggest (and most famous) fans as her MDNA Tour rolled into Chicago this week.

Madonna & the Bar Mitzvah Boy
The Queen of Pop singled out Shaun Sperling, best known as the “Bar Mitzvah Boy” after a 1992 video of him “Vogue”-ing his way into Jewish manhood went viral last month, as she performed “Like a Prayer.”

Madonna never goes to that area of the stage to get people to sing along with her, but clearly she was being spiritually guided to the one person out of 20,000 who deserved to sing along.

Regardless, the “Bar Mitzvah Boy” said the chance encounter with his idol left him feeling ecstatic. He wrote on Facebook…

I am now even more inspired to continue paying forward the lessons that Madonna taught me 20 years ago of self-respect, love, individuality, acceptance of others and always striving to be a better human being. I feel incredibly grateful that my 13-year-old dreams are coming true, and most of all for the love and support that I have in my life.


Avicii: I had a really great time
Madonna invited Grammy nominated superstar DJ, remixer and producer AVICII, aka Tim Bergling, to join her at Yankee Stadium on September 6 & 8 for her MDNA shows in New York City.
Bergling reciprocated Madonna’s surprise appearance at his headline show at Ultra Fest this year, when the two debuted AVICII’s remix of her “MDNA” track “Girl Gone Wild”.

Speakeasy: You just opened for Madonna at Yankee Stadium. Did you feel a different kind of energy from the crowd?
Avicii: Yeah, definitely, obviously. I mean, it’s not my crowd, it’s Madonna’s crowd. I had a really good time and went into it nervous because it’s not my scene, but it ended up really well, I think. It’s not that big of a leap as you might think. Madonna has always been very influenced by dance music and dance-music oriented. The music I play is not that far off.

Benny Benassi at the MDNA Tour in Abu Dhabi

Miami MDNA Tour After Party
After 44 sold out tour dates on the 2012 North American MDNA tour, Ferosh in partnership with Interscope Records is proud to present the only Official MDNA after party in honor the Material Girl herself! After the concert on November 20th, come celebrate all things Madonna at Grand Central in downtown Miami located only two clocks from American Airlines Arena. Superstar DJ Tracy Young will be commanding the decks and the dance floor for what will surely be an epic night! Giveaways, Specialty items…more details to come.

Monte Pittman in Seattle
Madonna’s guitarist Monte Pittman will be performing another solo acoustic show, this time at Hard Rock Cafe in Seattle, on Monday October 1st. Doors open at 7pm and there is no cover!
RSVP and share on facebook 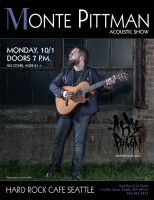 Madonna’s Fashion Evolution: 50 Iconic Looks
No pop diva has reinvented her fashion image with the consistency and creativity of Madonna. Madge emerged on the scene in the early ’80s as a street-smart “Boy Toy” and, over the course of her 30-year career, evolved into a fashion-forward icon whose sense of style became as influential as her chart-topping tunes. In celebration of Madonna’s new album ‘MDNA,’ we present 50 of her most unforgettable outfits, from jaw-dropping Jean-Paul Gaultier corsets to elegant Dolce & Gabbana gowns.
Go to Billboard.com