The Madonna and True Blue albums use the 2001 remasters, but don’t include the bonus remixes. American Life is the same original disc from 2003.

The box can be ordered at Amazon France.

Here are some pictures… 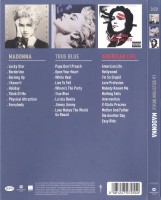