You took pictures, videos or just want to tell us about your MDNA Tour experience, do not hesitate to send us an email at [email protected] 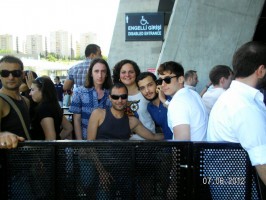 The Times of Israel – A week after launching her latest world tour in Tel Aviv, Madonna has enlisted the show’s Israeli warmup act to open her concert in Turkey.

The kabbala-loving “Girl Gone Wild” reached out to DJ Offer Nissim late on Wednesday night, asking the Tel Aviv-based performer to open her Thursday show in Istanbul. Despite the last-minute notice, the Israeli DJ accepted the offer, and is set to kick off the singer’s concert at the Turk Telecom Arena.

The high-profile invitation is the latest coup for Nissim, a veteran of Tel Aviv’s club scene who’s also managed to build a fan base overseas. The DJ has remixed songs by singers including Beyonce and Christina Aguilera, as well as by Madonna herself. Nissim squeezed the unexpected Istanbul appearance into a busy June schedule, and will race back to Israel after the concert for a Friday performance at Tel Aviv’s gay pride celebrations.

In her concert in Israel, Madonna told fans about her desire for peace in the Middle East, saying it’s not possible to enjoy her music without also wanting an end to violence.

Keen observers may have noticed that Turkey and Israel haven’t enjoyed particularly warm relations in recent years, so it’s nice the singer’s doing her part to promote a bit of cultural exchange.

This week in Istanbul, Turkey’s Prime Minister Recep Tayyip Erdogan opened a World Economic Forum summit with a speech in which he accused the Jewish state of “killing innocent people, children, babies, women and the elderly in masses” by bombardments and by keeping people “in the largest open-air prison in the world,” referring to the Israeli blockade of Gaza.

CNN – US pop icon Madonna performs on stage during her first ever concert in the Gulf as part of her MDNA world tour at Abu Dhabi’s Yas Island Stadium on June 3, 2012. An estimated 25,000 fans cheered and screamed as the Material Girl finally appeared on stage more than two hours late, wearing a skin-tight black outfit from her “Girl Gone Wild” album.

More than 20,000 fans waited in the warm weather for almost two hours before the ‘Queen of Pop’ Madonna kicked off her concert in Abu Dhabi last week, but her controversial performance is still echoing throughout the region today.

Coming from Tel Aviv in Israel, where she debuted her world tour last week, Madonna opened her Abu Dhabi gig with a series of religious, sexual and violent acts that left fans in both countries both mesmerized and shocked.

Some Madonna fans in the UAE, according to this columnist from Gulf Newspaper, were upset at the pop star for not abiding by their relatively conservative society.

Madonna opened her first act in Abu Dhabi with religious chants, and featured a huge cross on stage which was later cut in half. In a later scene, Madonna carried an AK-47 and used it – mockingly – to kill a few of the dancers on stage. She then proceeded to strip her clothes, albeit partially, leaving some fans with their jaws dropped in surprise.

It wasn’t just in the UAE.

In Israel, a monitor behind Madonna’s performance displayed an image of a female French politician with a swastika on her forehead. According to Haaretz Newspaper, the French politician is threatening to sue Madonna if the pop icon uses the image in any upcoming concerts in France.

Thanks to everyone who shared their material!