Fanny Pak is a seven member contemporary, hip-hop and jazz trained dance crew from Los Angeles, California that gained popularity after being a third place finisher on the second season of MTV’s America’s Best Dance Crew.

They are just incredible and we at Madonnarama are very excited with this news!

MDNA World Tour
The original show planned for Thursday, May 31st at Ramat Gan Stadium in Tel Aviv has been cancelled! The May 29th show has been rescheduled to May 31st. More details…

Here’s a new official trailer for the MDNA World Tour…

In other news, the first show in Colombia went on sale today and is already sold out!

W.E. promo in Paris
W.E. is being released on May 9th in France.
Have a look at the promo posters currently all around the subway in Paris… 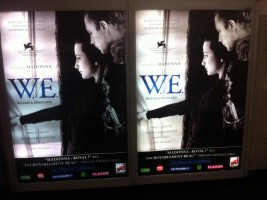 Have a look at the INCREDIBLE performances…