Madonna interview with Jimmy Fallon: “I want to sing a Serge Gainsbourg song when performing in Paris “ 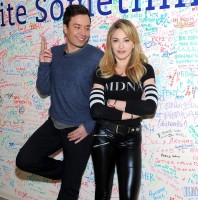 Here are some interesting parts from the interview…

Madonna will be going to Brazil with the Madonna World Tour.
First section of the show will be violent and is called” Transgression”
As she already revealed on the Larry Flick interview, Gang Bang will be included on the tour!
Madonna might perform “Physical Attraction” and “Love Spent” on tour.
She’d like to perform Serge Gainsbourg’s “Je t’aime… moi non plus” on stage in Paris…
The show will be a little bit under two hours.

On M.I.A. and Nicki Minaj: They are bad ass bitches

What would Madonna do if she was the president of the United States…
– Taking all the money spent on defense and put it into education.
– Gay marriage would be legal everywhere and accepted.
– No restrictions on any of her videos… ever

Finally, Madonna eats ice cream in bed while watching movies – The “Truth or Dare” fragrance has been inspired by her mother – Arianne Phillips is doing the costumes of the upcoming world tour – Madonna’s wearing “Party Rock” pants that were given to her by LMFAO…

Have a look at the video….