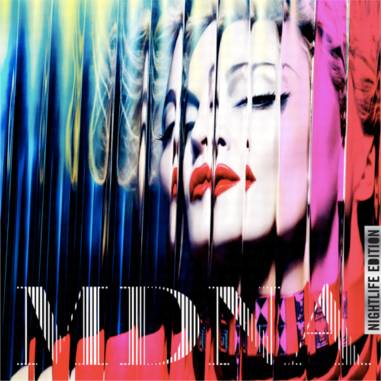 Smirnoff’s exciting offer to fans enables them to purchase the “MDNA” Nightlife Edition Remix Album by ‘liking’ their US Facebook page (facebook.com/SmirnoffUS) and placing their order for $3.50. The simultaneous March 26th distribution of the remixed downloads and the release of “MDNA” on March 26th enables Smirnoff fans to be the first to hear the unique compilation.

Simon Burch, Global Brand Director for The Smirnoff Co., commented, “It is a testament to Madonna’s phenomenal performance and album production that these tracks can be remixed whilst retaining their musical integrity and broad appeal. It is exciting to be giving our fans the first chance to hear these incredible tracks in an expertly produced compilation album.”

The Smirnoff “MDNA” Nightlife Edition Remix Album is part of a multi-faceted program between Madonna, her partner Live Nation, and Diageo, the parent company of The Smirnoff Co.

The SMIRNOFF word and associated logos are trademarks.

About Diageo
Diageo is the world’s leading premium drinks business with an outstanding collection of beverage alcohol brands across spirits, wines, and beer categories. These brands include Johnnie Walker, Guinness, Smirnoff, J&B, Baileys, Cuervo, Tanqueray, Captain Morgan, Crown Royal, Beaulieu Vineyard and Sterling Vineyards wines. Diageo is a global company, trading in more than 180 countries around the world. The company is listed on both the New York Stock Exchange (DEO) and the London Stock Exchange (DGE). For more information about Diageo, its people, brands, and performance, visit us at Diageo.com. Visit www.drinkaware.com and Diageo’s own global resource www.DRINKiQ.com for information and guidance on responsible drinking. In Great Britain, Diageo is a member of The Portman Group and supports The Drinkaware Trust.Celebrating life, every day, everywhere.