You heard about the “Truth or Dare” Blu-Ray release by Lionsgate first here on Madonnarama, back in October 2011.

Lionsgate is proud to present Madonna: Truth or Dare, available for the first time on Blu-ray Disc on April 3rd, 2012.

Go backstage and under the covers with the musical and pop culture icon, Madonna, as Lionsgate debuts Miramax’s Madonna: Truth or Dare on Blu-ray Disc this April. See the Queen of Pop as never before – singer, dancer, sex goddess, businesswoman and den mother – in an up close and personal documentary chronicling Madonna’s 1990 “Blond Ambition Tour.” Presented for the first time with a stunning new 1080P High Definition transfer and 5.1 DTS Master Audio, Madonna: Truth or Dare, including the original theatrical trailer, premieres on Blu-ray Disc on April 3rd, just as Madonna makes her way back into the spotlight. With a Super Bowl half-time performance, a new album, tour and the launch of her “Truth or Dare” lifestyle brand, 2012 is destined to be the year of Madge. Madonna: Truth or Dare will also be available on DVD for the suggested retail price of $9.98.

The top-selling female artist of all-time, Madonna has sold more than 300 million albums worldwide. Fresh off of her recent Golden Globe® win for Best Original Song for her directorial feature film,W.E., Madonna has also previously won a Golden Globe® for Best Performance by an Actress in a Motion Picture (Comedy/Musical) for her role as Eva Peron in Evita (1997), been named one of TIME’s “25 Most Powerful Women in the Past Century” and garnered countless other accolades. But Madonna is so much more. Madonna: Truth or Dare explores the icon as an artist and a person, from her dressing room to her bedroom. 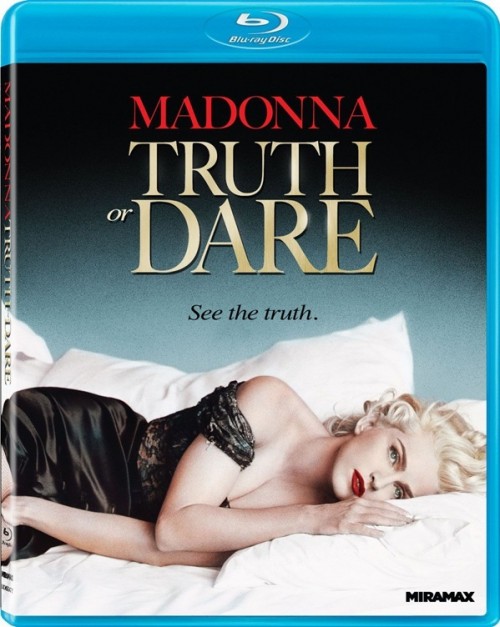