“I was born and raised in Detroit, Michigan where I began my career in petulance and precociousness.”
— Madonna, 1979.

It’s a great read and essentially a brief, but entertaining look back at Madonna’s early life, made available by LettersOfNote.

Clearly Lewicki was impressed, as Madonna got the part; her first movie role in fact.

She then, unsuccessfully, attempted to block its release a long 6 years later, in 1985, by which time she was already a star. 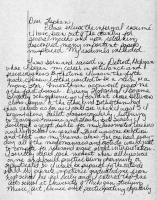 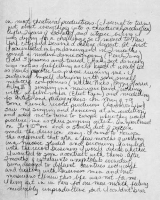 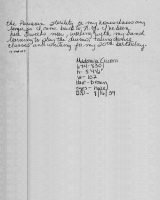 Please excuse the informal resumé. I have been out of the country for several months and upon returning discovered many important papers misplaced. My resumés included.

I was born and raised in Detroit, Michigan where I began my career in petulance and precociousness. By the time I was in the fifth grade, I knew I either wanted to be a nun or a movie star. 9 months in a convent cured me of the first disease. During high school, I became slightly schizophrenic as I couldn’t choose between class virgin or the other kind. Both of them had their values as far as I could see. When I was 15 I began taking ballet classes regularly, listening to baroque music and slowly but surely I developed a great dislike for my classmates, teachers and high school in general. There was one exception and that was my drama class. For one hour every day all the megalomaniacs and egotists would meet to compete for roles and argue about interpretation. I secretly adored each moment when all eyes were on me and I could practice being charming or sophisticated, so I would be prepared for the outside world. My infinite impatience graduated me from high school one year early and I entered Fine Arts School at University of Michigan studying Music, Art, Dance and participating regularly in most theatrical productions. (I seemed to turn just about everything into a theatrical production.) After 2 years of isolated and utopic living I was dying for a cha(lle)nge, so I moved to New York City and became a college dropout. At first I concentrated only on dancing and in 2 months joined a modern dance company (Pearl Lang) I did 3 seasons and toured Italy but dancing was not as fulfilling as I’d hoped it would be as Pearl’s psycotic ways were ruining me. I sustained myself dancing with some small mediocre companies (Walter Nicks, Peggy Harrel, Ailey III) singing in a New Wave band, working with a filmmaker (Eliot Fain) and modelling for artists and photographers. In May of 79 some French record producers (Aquarius Label) saw me singing and dancing at an audition and asked me to come to Europe where they would produce me as their singing artist. An apartment on 36 & 10th Ave and a steady diet of popcorn made the decision easy. I came to Paris on the agreement that after a few months of working in a music studio and becoming familiar with the record business I would decide whether I wanted to sign a contract with them. After 2 months of restaurants & nightclubs everyday, being dragged to different countries every week and working with business men and not musicians I knew this life was not for me. I hung out in Paris for one more month, feeling miserably unproductive, but I couldn’t bear the Parisian sterility or my homelessness any longer, so I came back to N.Y. I’ve been here 3 weeks now, working with my band, learning to play the drums, taking dance classes and waiting for my 20th birthday.