Lisa Tant, Derick Chetty and Jeanne Beker have joined Madonna at the exclusive dinner Monday night, after the premiere of her film W.E. at the film festival — and they did tweet every delicious morsel…

1. Next Year Madonna will be launching her new scent called “Truth or Dare” that supposedly smells like gardenias!
2. Madonna is Charming & stunning in person.
3. Don’t care about the reviews for Madonna’s W.E. I loved it – gorgeous fashion, powerful love story.
4. Madonna’s reaction to the standing ovation at Roy Thompson Hall – a nervous smile & hug to her “Wallis” Andrea Riseborough.
5. Madonna spritzed her new scent, Truth or Dare, on my wrist. Took it out of her clutch & grabbed my wrist. Gardenia, tuberose, musk.
6. I told Madonna that her scent smells like the movie – fabulous, sexy & a little violent. She loved that. At The Bay in March.
7. Madonna dinner starts with seared tuna w/ avocado appies & buffalo mozzarella with tomatoes.
8. And Madonna is leaving. Waves goodbye. So gracious. Had a very long talk about how much she wanted to tell Wallis’ story.
9. Sat with Harvey Weinstein who gave Madonna a pep talk about Toronto TIFF audiences. “If they stand up, they love it!”
10. What is Madonna really like? Interesting, gracious, funny and warm. So easy to talk to.
11. Mystified by all of the negative reviews by Madonna’s W.E. Everyone who saw it last night with me liked it & not because we were starstruck.

What we learn from Derick Chetty’s Twitter – Fashion stylist/writer at The Toronto Star.

1. At my photo op with Madonna in the green room, George Pimentel shouted to her, ‘put ur arms around him!’
2. Madonna to me: ‘hi Derick. I can’t hug you my dress is too tight’ So she held my arm. And the room spinned.
3. At dinner now with Madonna & cast…btw, no afterparty for her. She is flying out tonight.
4. JFK is staying open tonight for her private jet. How fab is that?!?

What we learn from Jeanne Beker’s Twitter – Host of FashionTelevision

1. Sitting a couple down from Madonna at a big wooden table. She was spritzing samples of her new scent Truth or Dare. Smells like gardenias!
2. And by the way, Madonna’s got ravioli in front of her. Was that an option? 🙂
3. Very impressed with how gracious and charming Madonna is being to everyone. I thought she’d have left by now….

The world’s biggest, and perhaps bravest, pop star stormed Roy Thomson Hall last night for the premiere of W.E., a film she directed and co-wrote. The love story of Wallis Simpson and the Prince of Wales, with a parallel tale of a Wallis-obsessed doctor’s wife, is Madonna’s first feature effort, a career move that film critics have not taken kindly to. I found W.E. to be entertaining, stylish, and fun, and I admire Madonna for holding her Garren-coiffed head high amid the barbs. After a private meeting, screening, and invitation to join her at her table for dinner, here are some other things I learned:

1. She is constantly interrupted. Party crashers, table crashers, associates, and wannabe associates, everyone wants a piece of Madonna, or, as one of her managers put it, “to hold onto her leg.”
2. It has been said before that Madonna is little, but just how little? She and I stood side by side for photos and we were both wearing four-inch heels: she Brian Atwood ankle-straps, me YSL Tributes. The tops of our heads were even. That would put her at about 5’ 3”.
3. She eats.
4. She eats pasta!
5. Madonna is a people person. It is so clear that she wants to connect. She looks you in the eye. She leans across the table when the room gets too loud to hear. Any of the nastiness or aloofness that was evident in the 1991 Truth or Dare documentary was nowhere to be found last night.
6. Madonna does not own any of Wallis Simpson’s jewellery, which was auctioned by Sotheby’s, an event that is a major part of the W.E. storyline. She clearly loves her bling, though; her fingers and wrists were covered in diamonds and a W.E. diamond choker ringed her neck. Many of Simpson’s jewels were replicated by Cartier for the movie, and then destroyed because the original pieces were meant to be one of a kind.
7. She drinks red wine.
8. Much like the rest of us, she checks her PDA for messages (likely for business), but with all of her closest associates at her side last night, it was probably to keep tabs on her three children. At dinner she resisted the urge until she was about to leave to board a private jet home to New York.
9. Madonna does her homework, though after she began researching Wallis Simpson, people came out of the woodwork with stories, she said. She even stumbled upon a cookbook written by Simpson, whose mother was a chef for the upper crust.
10. Madonna is keenly aware of where her bread is buttered. She publicly thanked the Bay, which sponsored her gala and hosted her dinner at the Grey Goose Soho House, and privately thanked Bay executives with a big smile and firm handshake. She gamely posed with a select few in the green room before the screening. And when film maverick Harvey Weinstein arrived at dinner she turned her attention to him as if they were the only two in the room. 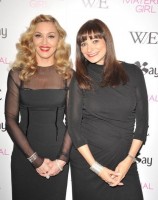 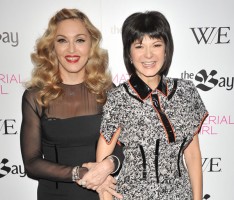