Madonna and Business by Forbes

Madonna has been a savvy business woman for as long as she’s been a celebrity, but her recent ventures have shown even more growth. In August of 2010, she launched a Material Girl brand of clothing, sold exclusively at Macy’s. Since then, Macy’s has expanded the line to 300 of its stores, up from 200 at the initial launch. Madonna’s daughter, Lourdes Maria Ciccone Leon, is following in her mother’s entrepreneurial footsteps. After helping her mom design the Material Girl collection, she is launching her own spin of the brand with the launch of Material Girl Beauty, a line of make-up and beauty products.

Part of Madonna’s secret to business success is her penchant for picking the right partners. For the Material Girl line, Madonna partnered with Iconix Brand Group, Inc. to form MG ICON. The joint venture then partnered with Macy’s Inc. for a distribution network already perfectly in place for the target market of teenage girls who hang out at the mall.

For her next venture, Madonna partnered with her own manager, Guy Oseary, and with the founder and CEO of 24 Hour Fitness, Mark Mastrov, to form Hard Candy Fitness. According to a Fox Business report, 24 Hour Fitness is the world’s largest privately owned fitness chain.

Talking about the Hard Candy Fitness Center, Madonnarama reader Viktoria from Russia, sent us this exclusive picture of the Fitness center in Moscow… 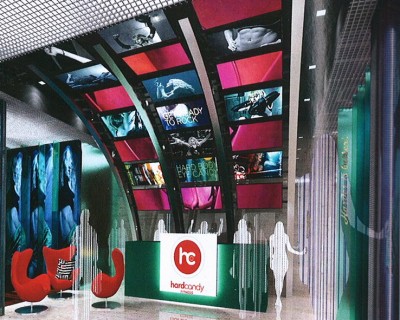