‘Madonna In Ecstasy’ by Peter Reynosa

Painter Peter Reynosa recently revealed one of his recent work called “Madonna In Ecstasy” in Fresno.
Reynosa described it as…

“A painting of a naked woman burning in hell who is having an orgasm who we think is in ecstasy but who actually is in agony.
I studied African art and tried to use a lot of its influences in this painting.”

Reynosa wants the painting on the cover of his book entitled Memoirs Of A Sex Addict.
And even though it’s not a portrait of Madonna, he says the body in the painting belongs to Madonna…

“Yes, that is Madonna’s body in the painting.
And why did he use Madonna’s body?
I did an exhaustive search for the most sexual body in the world and ended up choosing Madonna’s body.
I also chose her because she is the high priestess of sexual debauchery.
At least that is what she represents to the average person.
I painted Madonna’s vagina in the painting to look like our universe did when it first exploded into existence.
Her vagina is supposed to resemble how our cosmos looked when it first began.
This part of the painting is to represent the power women have to create life like our universe first created life.
I hope she takes it as a compliment.
And as far as being on the cover of a book about sex, this obviously can’t come as any surprise to her.” 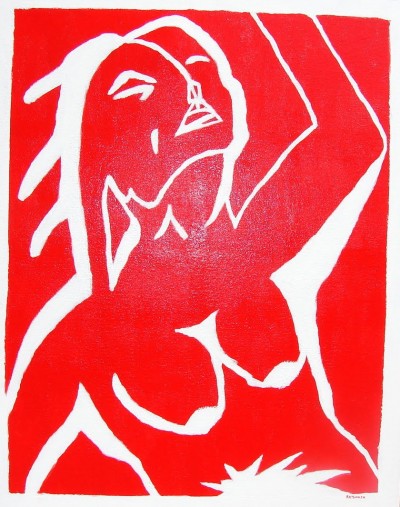