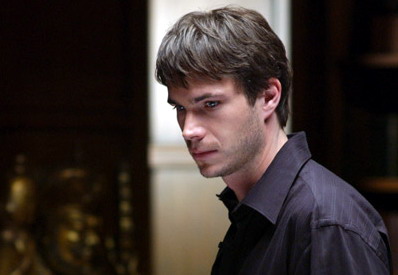 James D’Arcy has told how he learnt to dance for Madonna as he found her such an inspiring director.
The young actor plays Edward VIII in the singer’s directorial debut WE, about the king’s abdication over his relationship with Wallis Simpson.
He explained…

“There was a dance sequence that when I first saw it was like something out of Dancing With The Stars it was amazing – and I can’t dance.
It was this extraordinary beautiful dance with lifts and twirls and I can’t do that, but you do because she somehow makes the impossible possible and it gives you amazing self esteem when you do these things.
There’s nothing quite as good – to get a pat on the head for dancing from Madonna – that’s a pretty good feeling.”

The dance scene never made the final cut of the film, co-starring Andrea Riseborough, but he learned plenty of other skills for Madonna.
D’Arcy said…

“She challenged me to learn to play the bagpipes in six weeks, which is next to impossible I was told, but I did manage to do it because you feel like there’s no other way, you’ve just got to do it.
I can ride horses already but I was in pretty good physical shape for that film and that was again at her request.
I know that obviously her fame comes through a slightly different art form but she was more prepared than any director I have ever worked with, possibly with the exception of Peter Weir, but I mention her in the same sentence, that’s how prepared she was.
She was extraordinary.”