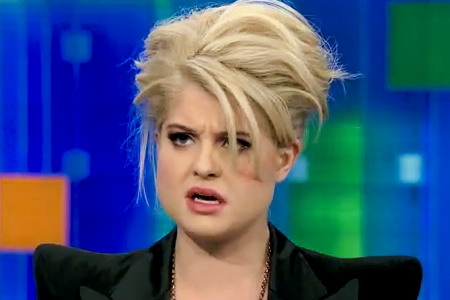 On yesterday’s CNN Piers Morgan Tonight, Sharon and Kelly Osbourne chatted with him about pretty much everything.
When Morgan brought up his well-documented hatred for Madonna—and argued that she’s a bad mother for thrusting daughter Lourdes into the spotlight—an annoyed Kelly brilliantly put him in his place… with an unexpected help from her mother, Sharon.

Piers Morgan: [Kelly Osbourne’s Papa don’t Preach has just been played] This is Kelly covering the song “Papa Don’t Preach” and this is about as close as Madonna we’ll ever get to be on this show, because she’s banned, as I made quite clear before. So you and I disagree about Madonna. I find her intensely irritating. You like her, don’t you ?

Kelly Osbourne: I do, I do really like her. You just don’t like her, because you didn’t get what you wanted.

Kelly Osbourne: I did so much. I wanted to be Madonna when I was little… the curly hair, wear tons of bracelets… I loved her whole look. I don’t know, she was such an icon and still is to me.

Piers Morgan: Here is the thing I find annoying, amongst many other things. She always banged on about protecting the children and all those kind of things. And then the moment Lourdes is 14… now has her own fashion line and she’s being thrust out there, popped away as a big celebrity.

Kelly Osbourne: I have to stop you right there and let you know something. This is because Lourdes wanted it, not Madonna.

Piers Morgan: I think it’s a really interesting point for a parent. I know it’s a decision you obviously went through went the kids were young about the show [The Osbournes]. Madonna is doing the same thing. You are making a decision that a minor, which is what Lourdes is, is not legally responsible or able to make.

Kelly Osbourne: Lourdes went to school the day of the photoshoot. She went to school and didn’t come to the shoot ’till after she was done with school. I think for Madonna, from what I gathered from the short time I spent with her… Her daughter goes to school, that comes first and then everything else is after.

Piers Morgan: But making your daughter, at 14, a celebrity…

Kelly Osbourne: You just don’t like her, so stop. So if you hate Madonna for that, then you’ve got to hate my mum for it as well…

Piers Morgan: No, because I think your mother is more straightforward and more sincere.

Sharon Osbourne: I never said that I wouldn’t let you watch television or read magazines or any of that. You were like plunged into pop culture.

Kelly Osbourne: Well I have to say that Lourdes is one of the most well-rounded, polite, smart, well-educated girls I’ve ever met in my life… ever.

Piers Morgan: Really ? So maybe there’s hope yet for the family.

Kelly Osbourne: Yes. She’s a really good mum, from what I can see.

Check out the video at gawker.com