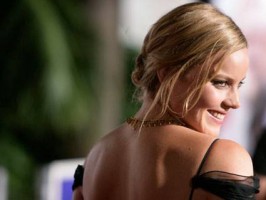 Abbie Cornish, 28, said that Madonna proved herself time and again, during an interview for Day & Night at the Sucker Punch premiere.

“It was beautiful to watch her evolve throughout the filming.
She was a very interesting director to work with because of her life and background.
She’s also a sponge, she soaks everything up around her and she has such a great eye.
I was intimidated at first but it was an incredible experience to work with her.
I remember when we were shooting Madonna said, ‘I really want to go to Venice.’
And sure enough, we’re off to Venice.
That’s Madonna. She’s such a force. She’s such an amazing woman.
If she puts her mind to something, it’ll actually exist.”