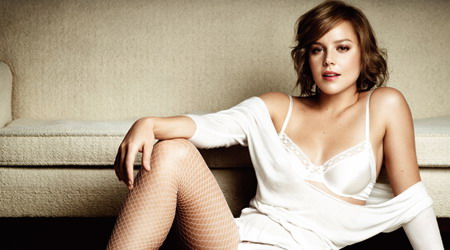 According to Oscar Isaac, Madonna is a “formidable” filmmaker.

“It’s a modern day [story] and Abbie’s character goes to Sotheby’s to see them auctioning off all of Wallis Simpson’s memorabilia. I’m a security guard that works there that she ends up having a romance with.
I was summoned to Madonna’s ‘lair’, her house up in New York and met with her for a few hours.
We just had a great conversation and off of that she hired me.
It was awesome.
She is definitely a formidable woman, she is such a determined and incredible woman that it never left my mind that this icon was directing us – yelling at me to make love better and things like that!
Anything she ever asked for was always right on. And she’s very funny, that’s what I wasn’t expecting, she has a great self-deprecating humour and wit.
I loved it, I love her.”

Abbie Cornish also praised Madonna as a woman and director.
She explained that she had scheduled in a Skype chat with Madonna before they started working on W.E.

“The first time I met her was on Skype, I was in Australia and she was in New York. I mixed up the time difference, so I was a day early.
Seeing her on the computer was surreal. I was presented with the human incarnation of this woman that we know as Madonna – it was incredible.
I still haven’t seen a finished product of the film yet but there’s so much within that movie. And I believe we’re going to Venice [Film Festival] with it.
Madonna was amazing to work with. It was interesting making that film with Oscar (Isaac) too, because in [Sucker Punch] he has such an ominous, dark, messed-up presence.
Then to go and make a film where he was playing a love interest – he’s this Russian pianist who is very sensitive – that was a lot of fun.
Madonna’s amazing.”