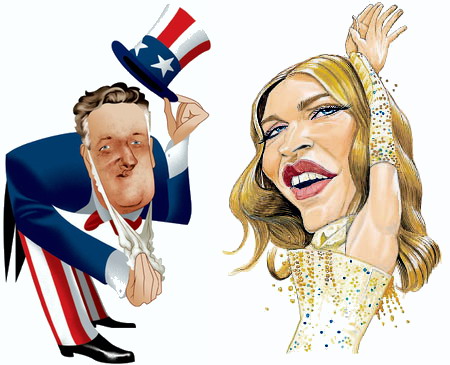 During an appearance on Conan O’Brien, CNN talkshow host Piers Morgan defended his decision, again, to ban Madonna from his show…

“She’s just so bloody annoying, isn’t she? I think I’ve got the pulse of the nation [by banning her].”

He then regaled the audience of an awkward, probably false, run-in he had with Madonna at last weekend’s Vanity Fair post-Oscars party at the Sunset Tower hotel in Hollywood…

“Bear in mind that when I came out with my Madonna ban, I’d known her like 25 years.
Her publicist put out a statement saying, [in a mock American accent] ‘Madonna has never heard of Piers Morgan.’
This moment came at the Vanity Fair party where, in Madonna walks wearing clothes befitting a 17-year-old… It was just really awkward.
I think she brought Jesus, the 20-year-old boyfriend…
Everything was awkward about this moment.
I just caught her eye…
Of course she wasn’t able to recognise me because she’s already stated that she doesn’t know who I am.
So we had this kind of stand-off where I was going, ‘You’re banned’ and she was looking at me going, ‘I’m pretending not to know who you are’…
She’s ghastly.”

After a dreadful beginning of “Piers Morgan Tonight”, Larry King told a BBC radio show that his successor, Piers Morgan, “may have been oversold” by CNN as a new, edgy type of broadcaster.

“One of the problems they did was oversell it.
He was going to be dangerous, he’s going to be water-cooler talk. ‘Wait ’till you see me. I’m different.’ He’s good! he’s not that dangerous.”
He may have been oversold…I wouldn’t say this is a bad show.”

But February was a good month for his show and CNN overall.
In comparison, “Piers Morgan Tonight” drew 50% more people in the 25-54 year-old demographic in February than Larry King’s show attracted in February 2010.
Morgan drew his largest audience in that target demographic ever on Monday night, when Charlie Sheen made a last-minute live appearance.
In February, CNN drew, on average, 243,000 viewers between 25 years old to 54 years old—the demographic that cable news advertisers covet, partly thanks to Morgan’s show.