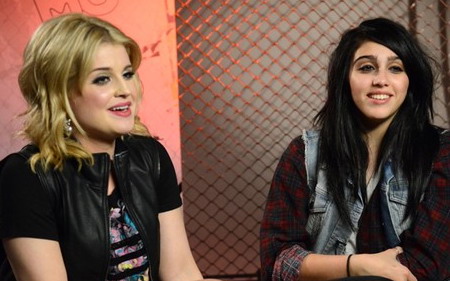 Kelly Osbourne has revealed she is still in shock at becoming the new face of Madonna’s Material Girl clothing range and is waiting for someone to tell her it’s all a dream.
She said…

“I’m still waiting for someone to pinch me and wake me up.
I can’t believe that I’m actually doing this and working with Madonna and Lola.
What I like about it is that it’s a brand for every woman, not just for young girls.
They take high fashion and make it affordable and they don’t cut corners.
And it’s so my style.”

Lourdes revealed she wanted Kelly for the campaign as soon as they met at a Jay-Z concert in London’s Hyde Park last year, because she was so impressed with her quirky style.
She explained to WWD…

“I remember exactly what she was wearing: a striped maxidress with a jean jacket and pink blazer and I thought she looked so cool.
So when [Iconix] came to us with a selection of girls [for the campaign] and she was one of them, I was like, ‘Oh my God, she’s great and she has great style.’
I just think she’s very individual but at the same time she’s very fashionable.”

Kelly was equally taken with Lourdes and as the daughter of famous parents herself – Ozzy and Sharon Osbourne – she admitted she found it refreshing that Lourdes has managed to remain normal.
She explained…

“I hate to call her a little girl, but this girl has the best style and she’s so herself.
And she was the most polite, well-mannered, well-rounded, unaffected normal girl in Hollywood that I met.
I couldn’t stop raving about her, so when I got this phone call I just had to do this.”

“There are pieces in the line that I’d be comfortable wearing and other pieces more for my daughter.
I think Kelly is aspirational for the juniors customer and older women are familiar with her from television.
Her work reaches such a broad audience.”
We were trying to be authentic to the roots of Madonna and shoot in the East Village clubs that she could have played when she was just starting
There was a lot of girl power on the set.”