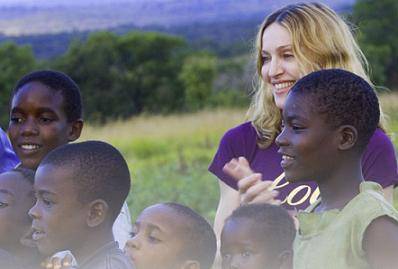 Logistical problems and other concerns have led Madonna to abandon her plan to build a girls-only school in Malawi, but the new leader of her effort says her instead plans many more schools with educational groups already working toward that goal.

“Basically, what we’d be doing is expanding the ability for a group of nonprofits to provide education to more kids,” said Trevor Neilson in an interview with The Associated Press on Thursday.

Neilson, a former executive with the Bill & Melinda Gates Foundation, joins the Raising Malawi project as a partner of the Global Philanthropy Group, a leading international organization that works with organizations and governments around the globe.

He and several other experienced philanthropy experts became part of Raising Malawi’s revamped team in November.

“Madonna increasingly began to have concerns about the effectiveness of the existing strategy and management team, and as a result has made sweeping changes in order to better serve more children in Malawi,” he said.

The Kabbalah Centre, once a part of the project, is no longer involved, Neilson noted. Madonna has practiced Kabbalah, a form of Jewish mysticism, for years.

The bigger changes involve the scope of Madonna’s educational plans in the impoverished African country. The superstar, who has adopted a boy and a girl from Malawi, had initially planned to build a school for girls, most of whom don’t get the opportunity to go to school.

The school was to be on an approximately 117-acre plot of government land near the capital, Lilongwe. But soon after the location was announced, several local villagers claimed they owned the land and the government was forcing them off of it.

“Obviously, Raising Malawi didn’t know anything about this, and was surprised, yet Raising Malawi paid those people over $130,000, which in Malawi is a lot of money,” Neilson said.

Even after that, however, he said, Raising Malawi never got title to the land. In addition, Neilson said the school was being built in an area where there were not many children, and too much effort was being paid to the design of the building.

“Madonna was shocked to find out how much time and money had been spent on architecture,” he said, though declining to give an exact estimate, simply saying, “too much!”

Instead of creating a Raising Malawi school, the new plan is to use Raising Malawi’s resources to partner with other NGOs, or non-governmental organizations, already working to provide a better education in Malawi.

“Working in consultation with a series of non-profits and education efforts, we’re looking at a new strategy that builds more schools, but embeds them in communities of Malawi where the students are,” he said.

“Basically what we’d be doing is expanding the ability for a group of non-profits to provide education to more kids,” he added.

Neilson said Raising Malawi has contacted its key donors and informed them of the change in strategy: “All of the major donors we’ve talked to are really excited about the strategy.”

Neilson also added that contrary to reports, the charity is still working very closely with the government, and that Madonna called the president’s office and explained her new plans.

New schools could be built by the end of this year, and the educational efforts, while geared toward girls, will not exclude boys, he said.

“The need is so broad that you don’t want to come into a community and say, ‘Sorry boys, you can’t go to school,'” he said.

Neilson said Madonna would go to the region “soon” and stressed that she was still fiercely committed to the country: He said Raising Malawi has dispersed $13 million toward charitable efforts over the last few years.

“She’s very frustrated that the project has not moved faster and has not reached children with these services in a faster way,” he said. “Ultimately, that’s all that matters, is that children go to school.”

He said Madonna has also denounced Malawi’s anti-gay measures, but said she would still work with the country to help the children. “I don’t think that that is core to this project in any way.”

Cameron Sinclair, co-founder of Architecture for Humanity and the Open Architecture Network, says Madonna Makes The Right Move in Malawi.
As a sharp critic of her earlier plans for a large ‘academy style’ school I welcome this move and hope it can be a point of reflection for many of us involved in the development process.

Defining Success
Working with communities is often a tricky and long road. In order to be sustainable it must respond to the needs of the community yet have a sound model in order to remain in existence long after the initial investment is made. Whether you are working internationally or domestically, if the end users are burdened with a overly built facility they are exposed to more financial risk then had you not intervened. Therefore success should not be defined by how good a building looks but how it is used and how it is loved. This can be best achieved by employing a community led development process.

The Values of Community Led Development
To inspire communities to build sustainably my group, now building in 22 countries, is guided by a participatory design process that defines the client as a complex ecology of stakeholders rather than a single owner or occupant.

In a traditional development model, building services and construction firms bid for projects. In this model the design process is “closed.” Community members have little interaction with the design team during the design process and little personal connection to and investment in the resulting structures.

By contrast, participatory design, or community design as it is sometimes called, engages building stakeholders of all ages and walks of life. In the community design model, the design process is open. Stakeholders, be they community members, homeowners, parents, students, or government officials, are invited and encouraged to participate in the design process through planning sessions, hands-on workshops, exhibitions, community interventions. This creates a sense of ownership and pride and empowers community members to become active instigators of change in their community. This process allows the entire group to work collectively to overcome a series of typical challenges including;

1. The removal of typical barriers to participation, such as formal hearings or inconvenient locations
2. Greater communication between different sectors and interests in the community, including government organizations, religious organizations and individuals
3. The prioritization of issues by and with those most affected by the decision-making process
4. Resolution of complex land-tenure issues
5. Mitigation against political instability by defining process and responsibilities
6. The ability to convey complex ideas simply to expert and non-expert participants alike through the use of graphics, 3-D models and other visual presentations
7. Environmentally and Culturally Appropriate Design
8. Opportunities for skills training and advancement
9. Creation of green collar jobs in the construction trades
10. Greater local capacity for local leadership and future economic development

A good example of this is the recently completed Mahiga Hope High School and Rainwater court in Mahiga, Kenya. A collective of small non-profits and community groups came together and built a holistic approach to education using small funds (less than $200,000) and invested in the community that was already there. The project took just over a year to complete but was done in the time frame of the community not the funders.

Investing in Reality
Rather than investing all your funds in one big complex, it is better to spread your investment to reach a broader impact. In the case of Raising Malawi the choice was one academy vs. upgrading dozens of appropriately sized existing schools that, in turn, can be replicated and scaled. It’s a choice of supporting a few hundred children or to impact tens of thousands.

In an industry that only reports success, it is an incredibly admirable thing that Raising Malawi has open and come out and said ‘we didn’t get it right, we learned and we are adapting’. For every grand project profile there are thousands that disappear into the vapor leaving promised communities in the lurch. Lets hope this tale will reverberate through the philanthropic world and that millions are invested wisely and not in the creation of white elephants that dot the landscape.