The Letter of a Record Exec who did “Pass on Madonna”

Even the incredibly talented among us have to pay our dues.
Millennium Records president Jimmy Ienner made perhaps the stupidest decision of his entire career, by rejecting Madonna’s demo.
He wrote that while he “enjoyed listening to Madonna” and liked several of her songs, he did “not feel that she is ready yet.”
His verdict? “I will pass for now, but I will wait for more.”
Of course, Ienner never got a second chance to weigh in on Madonna… Sire released her debut album a few years later, and the rest is pop-music history.

Have a look at the letter… 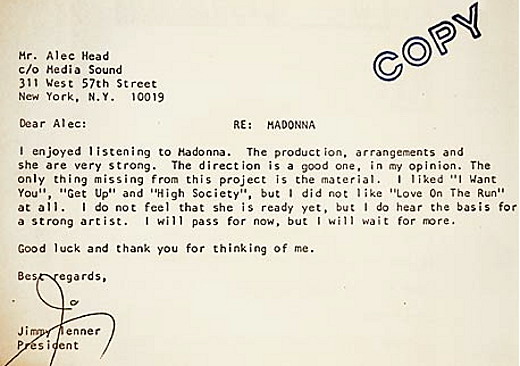