David Harbour: “Madonna made me a Man” 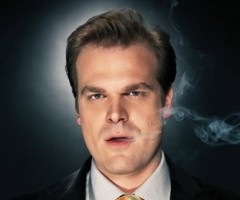 What other films do you have on the horizon?
David Harbour: I’ve actually got four movies coming out this year. Crazy! One, called The Convincer, is going to Sundance, Isolation is touring festivals in Europe, and then I have this Madonna movie.

Pardon? Madonna?
David Harbour: Yep, I did a movie called W.E., the story of Wallis Simpson and Prince Edward, written and directed by Madonna. It’s a great script and story, but to be honest I mostly wanted to hang out with Madonna for a couple of months. She made me a man when I was 12 years old. I remember the exact video, “Open Your Heart.” The best part is I got to dance with Madonna to Madonna music, which was the most surreal thing ever. It’s like watching Dog Day Afternoon with Al Pacino. That’s next on my list.