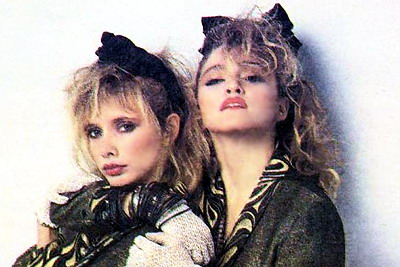 For the 25th anniversary of Desperately Seeking Susan, Susan Seidelman organized a special screening of the film in New York.

Madonna was a no-show at the event but her co-stars, Rosanna Arquette, Mark Blum and Aidan Quinn answered a few questions about the movie.

Director Susan Seidelman answered questions about Madonna and revealed that Bruce Willis auditioned for the part of Susan’s boyfriend back in the day.

How did you find Madonna for this film?
Susan Seidelman: Madonna lived down the street from me, so she wasn’t “Madonna,” in quotes. I knew her from people who were in the downtown music scene. We started to audition more up-and-coming actresses who had done some films -– people like Ellen Barkin and Melanie Griffith and Jennifer Jason Leigh and Kelly McGillis, who had just made one or two movies and were getting known. But even though the film is a fairy tale, in a sense, it needed to be grounded in some kind of authenticity. We didn’t want actors putting on costumes and playing downtown.

You wanted someone who genuinely embodied it, rather than an actor who would be playing at it or pretending it?
Susan Seidelman: Right. And she hadn’t really done a movie before. She’d played in a band in the background of “Vision Quest,” whatever. But it wasn’t really an acting role. I hoped that because she is a performer and she had such an interesting persona, I could capture that on film somehow. And that does involve a lot of acting. People sometimes think, “Oh, it’s just being.” But it’s not. When you have to say lines and hit marks and get your lighting and repeat it 20 times from different angles, it’s acting.

Given her inexperience, did you have to make a case for casting her in the film?
Susan Seidelman: Well, yes. She had to do a bunch of screen tests. But it was the early days of MTV, and she happened to have a video that got a lot of rotation, because there just weren’t a lot of music videos at that time. I think it was for “Lucky Star.” So the the Orion people out in L.A. saw that and liked the way she looked. She was also helpful in auditions for the actor that was going to play her boyfriend. Somewhere, in a carton in my basement, I have Madonna and Bruce Willis doing an early screen test for that.

Have a look at video (from Boy Culture)