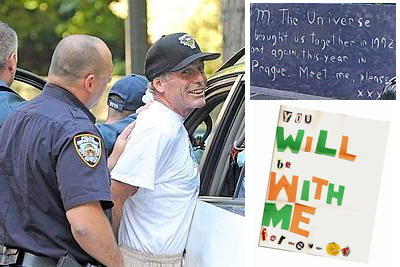 A retired New York City firefighter yearning to meet Madonna has been accused of scrawling messages of adoration on the sidewalk outside her apartment building and possessing a 7 1/2-inch ice pick.

Robert Linhart is charged with graffiti and criminal possession of an ice pick recovered from his car. He’s also charged with resisting arrest outside the building near Central Park.

“I can be here. This is police brutality. I have a right to do this. I am not doing anything wrong.
I keep running into Madonna. I saw her in 1992 and I’d actually like to meet her in person. I won’t stop until I actually meet Madonna.”, he told cops, according to court papers.

Linhart was arraigned in Manhattan Criminal Court.
A judge set his bail at $20,000 cash and ordered a psychological evaluation.

Defense lawyer Cheryl Bader tells the Daily News there was “no threatening conduct” and it’s “not a crime to adore Madonna.”

He reportedly promised cops that he will head straight back to Madonna’s pad after he is released.
“I won’t stop until I actually meet Madonna. I’m going to go right back there [Madonna’s apartment] and do it again,” he said, according to court papers.