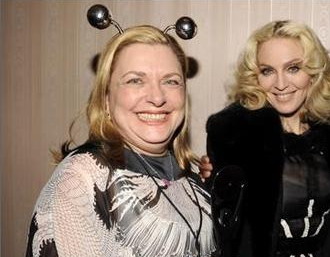 Madonna is known for being tough, and her publicist, Liz Rosenberg, is apparently just as tough. She gave strict instructions to reporters at Wednesday’s “Material Girl” fashion launch at Macy’s. What happened to one reporter who chose to disobey is the stuff of legend.

Rosenberg told reports they could each ask three questions of Madonna and her daughter Lourdes at the “Material Girl” event; and the questions had to be fashion related. According to reporters on scene, the “fashion-only” rule was to keep the press from asking about her newly arrested stalker.

Well, since reporters are known for being oh-so-obedient, one reporter from “The Insider” decided to overstep her bounds, and ask a non-fashion question. The question had nothing to do with Madonna or her stalker, though. The reporter asked, “What do you think about Ashton and Demi breaking up?”

According to witnesses, Madonna’s publicist “slapped the microphone out of the reporter’s hand.” Rosenberg even went so far as to point “at the reporter and [say], ‘Bad girl!’”