Madonna: The Truth Is She Never Left You [The Advocate – March 2012 issue]

Here’s the Madonna article by Ari Karpel from the upcoming March 2012 issue of The Advocate, featuring Madonna on the cover! 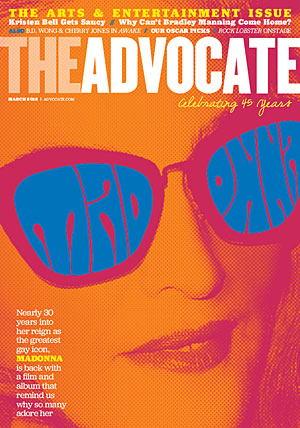 Nearly 30 years into her reign as the greatest gay icon, Madonna is back in a big way with her new film, W.E., and her first studio album in four years, reminding us why so many adore her.

On W.E. and being famous…

I was intrigued. Like Wallis Simpson, I felt like an outsider. I thought, Life is so different here, and I’m used to being a New Yorker, and I have to learn how to drive on the other side of the road. Suddenly, I found myself living out in an English country house and trying to find my way in this world, so I decided to really take it on and do research and find out about English history and learn about the royal family.
The idea of making a choice for love wasn’t really part of their world. The fact that they eventually found each other and were willing to jump into this fishbowl of scandal and rile people up, even though Wallis knew, as she says in the film, that she would become the most hated woman in the world.

I mean, I certainly don’t engage [with the media] as much as I did. When people are writing about you in the beginning and they’re saying nice things, you’re like, ‘Oh!’ You feel this lift of energy. Then they say bad things, and of course, you’re affected by that too.

It’s intriguing because we are raised to believe in the fairy-tale kind of love, that we are going to be swept off our feet by … you know, in both of our cases, Mr. Right, and our knight in shining armor is going to come along and save us, pick us up, and put us on the back of his beautiful steed, and we’re going to ride off into the sunset and live happily ever after… God knows, that doesn’t happen.

There are so many things about her. The fact that she said he left his prison, only to incarcerate me in a prison of my own.
In spite of it all, I think she lived her life in a very dignified manner. And she wasn’t a victim.

On sexuality and AIDS…

I never left them. When you’re single, you certainly have more time to socialize and hang out with your gay friends, but then you get married and you have a husband and you have children, and your husband wants you to spend time with him. I’m not married anymore, but I have four kids, and I don’t have a lot of time for socializing.

I hope nobody’s taking that personally. It certainly was not a conscious decision. As it stands, most of my friends in England are gay. But I’m back. Never fear. 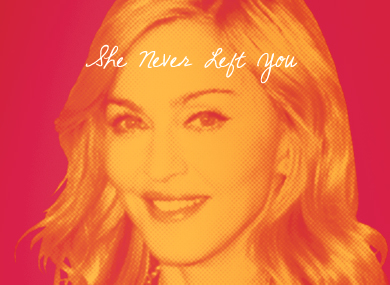 What does she think of how Gaga connects with her fans, and is it parallel to the relationship you had with gay fans early on?

It seems genuine. It seems natural, and I can see why she has a young gay following. I can see that they connect to her kind of not fitting into the conventional norm. I mean, she’s not Britney Spears. She’s not built like a brick shithouse. She seems to have had a challenging upbringing, and so I can see where she would also have that kind of connection, a symbiotic relationship with gay men.

On being a director…

I’m magnificent I don’t know — I’m pretty methodical and detail-oriented, very specific with everybody from the camera crew to the actors to the costume designer to the hair and makeup people. I was very specific with everybody all the time. I love giving actors as much information as possible and helping them as much as I can and then leaving them alone if they want me to.

Madonna is self-aware enough to know that there are people who actively dislike her, who don’t know her and yet presume that they do and pass vitriolic judgments against her.
I was like 23 years old when she called me to do Truth or Dare. We always remained in touch.

On being a parent…

I’m a strict mother. My daughter doesn’t know why I won’t allow her to get everything pierced or a tattoo or dye her hair blond on the tips and pink at the roots. But from now until then…
They just really want me to just be Mom and be normal, and don’t show up dressed in any outlandish way. Just come to school, do the parent-teacher meetings. I can’t even wear a tracksuit. That attracts attention too. You know, they don’t really want to see me as a famous person or a celebrity or somebody. They don’t get it right now. They think I’m a little quirky.

Reading Patti Smith’s book Just Kids really helped me. It’s important to remember [that magical time when being creative and innocent and free was everything] and bring that forward into your life and to have spontaneous moments.
On Sunday, I squeezed my four kids into the car and [went] shopping in East Hampton. It was very weird. The people in Ralph Lauren were not prepared. I never go shopping. And my daughter was looking like — Madonna scrunches up her nose, as if in disbelief — because she’s always trying to get me to go shopping, and I never will. That was fun.

It seems that Madonna is still enjoying what she’s doing. She even seems to have mellowed a bit. Reinvention? Maybe, at 53, she’s had enough of that.

Is making a film reinventing myself?
I don’t think so. I’m just telling stories with different clothes on.

Read the full article at The Advocate