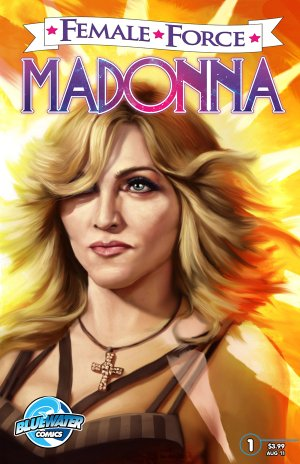 Madonna will have her life story told in 32 pages by Bluewater Productions Inc., the latest celebrity to be part of its semi-regular line of “Female Force” comics, the publisher said Thursday.

“Our goal is to show the little-known events and influences that resulted in Madonna becoming the phenomenon she remains to this day, more than a quarter-century after she burst upon the scene.
A visual medium provides perspective that is not only accessible but more relatable to the average person without losing any of the information involved.”

The one-shot issue — due out in August for $3.99 and written by C.W. Cooke and drawn by Michael Johnson — will look at her life as it transformed from a little-known singer into a multimillion-record-selling entertainer and trendsetter.

“Most pop stars owe everything to this woman.
It’s amazing all of the things that she’s done in her lifetime, and I have a feeling that this is still only the beginning.”

For more information on “Female Force: Madonna” and other comics from Bluewater Productions, go to www.bluewaterprod.com or check them out in your local comic book shop, Barnes & Noble and Amazon.com. To Pre-order it on Amazon click here.