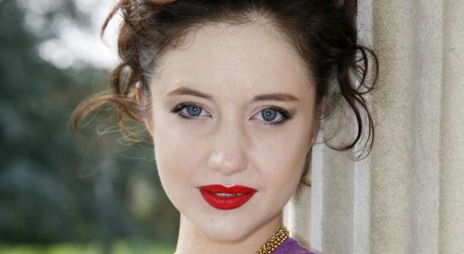 In Madonna‘s upcoming film, W.E. history is going to take a back seat to fantasy.

According to 29 year old british actress Andrea Riseborough, the Duke and Duchess of Windsor were not Nazi sympathizers–even though they visited the Third Reich, appeared in a newsreel with them, and are well documented historically to have made some horrendous social and political choices. As well, the Duchess of Windsor–Wallis Simpson–did not cheat on the Duke. And the Duke–formerly King Edward VIII–was brilliant.

Riseborough, who plays Wallis in “W.E.,” told website showbiz411 that people got it all wrong…

“Do you know how many people visited the Nazis?
Everyone was enthralled with them.
The Duke and Duchess were just two of lots of people, and shouldn’t be thought of badly.”

Also, W.E.’s back story is going to be that Edward was the brilliant brother, and that Bertie – King George – wasn’t much.

Riseborough also tells that in the film, her character – Wallis Simpson – will have some fantastical cross-generational meetings in person with a modern character called Wally, played by Abbie Cornish.

Rumour has it the film, all done and now being edited, could be sent to the Cannes Film Festival for possible inclusion.