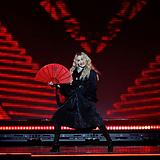 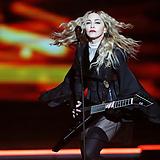 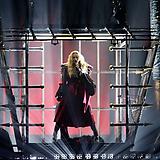 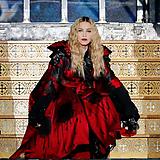 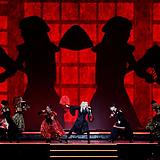 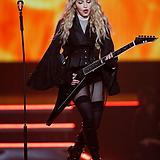 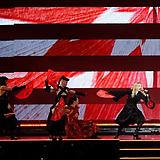 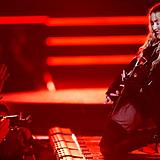 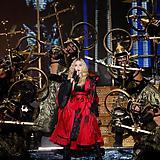 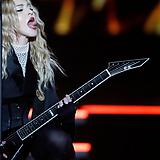 The official #RebelHeartTour candles are to premiere tonight in San Jose! The exclusive scents personally selected by Madonna will be available on stands (while supplies last) so make sure to get yours!

Was it when she emerged in a cage, lowered from the ceiling, then pranced with dancers carrying big crosses and dressed like medieval Mongolian warriors, to open the show with “Iconic”?

Was it when she and her female dancers, attired like nuns from the head up, and below, wearing black bras and white panties with ruffles on their bums, slithered like strippers on poles on “Holy Water”? (The number also had an awesome, “Last Supper”-like banquet.)

Was it when she soloed on “Like a Virgin,” accompanied only by percussion, on a runway in the center of the arena, doing loose and soulful dance moves reminiscent of Michael Jackson?

Was it when she did a Spanish section, in toreador garb, with rallying bulls on “Living for Love,” followed by “La Isla Bonita,” then continued the theme (after a costume change into a long, flowing dress), with Latin-infused takes on “Dress You Up,” “Into the Groove” and “Lucky Star”?

Was it when she pushed her tuxedoed, top-hatted dancers down a slanted platform during “Material Girl”?

Was it when she strummed a guitar during “Rebel Heart” as numerous amazing drawn and painted images of her created by artists were projected onto huge screens at the back of the stage?

Or was it when she sang the line “Do you know the way to San Jose” and told the capacity multi-generational crowd, “It’s so good so see my old friends and my young friends” and “You’re the best audience in the world”?

The nearly two-and-a-half hour show, which started late at 10:15 p.m., was a visual and aural feast from start to finish.

At 57, the true blue (she did a breezy version of “True Blue” amid stacked tires under a crescent moon on a set that looked like a service station, and a whole car was pulled out for “Body Shop”), icon shows no signs of slowing down.

After 30-plus years in the business and holding the Guinness World Record for best-selling female artist of all time, she sounds and looks fantastic, from her gorgeous flowing mane to the high heels on which she moved with nary a misstep.

As always, she was wonderfully in control, provoking with wild images addressing big themes: sex, religion, power and violence, and commanding her fans to lead, not follow.

This time, she tacked on happiness, and even smiled.

She’s not above having a good time, either. Decked out in stars and stripes, she encored with the anthemic “Holiday,” and exited the stage not unlike the way she entered, via a trapeze bar.

Madonna’s Rebel Heart Tour, which came to the SAP Center in San Jose Monday night, is a definite mixed bag, with almost as much going for it as against it.

The positives have to do almost exclusively with the visuals, which includes the set design, choreography and costuming. The images, as with past Madonna tours, can be perplexing, confusing and disturbing. Yet, they are also often quite intriguing. That’s enough to save this tour from the dust bin, lifting it from bad to mediocre.

The negatives? Well, how much time do you have? The shortlist includes the song selection, the reliance on iffy remixes and a general lack of purpose to the production.

All of that had a huge impact on the 12,500-plus fans who turned out on Monday. Their enthusiasm level started out strong, but dwindled as the night progressed.

Part of that had to do with how late Madonna took the stage — more than two hours after the scheduled show time. Not surprisingly, the crowd looked absolutely exhausted toward the end — and not in a “that show was so much fun” type of way.

An even bigger issue was the set list, which focused too strongly on newer material instead of the hits. Now, I don’t have a problem with new material — just bad new material, which is the kind Madonna is serving up these days.

The 57-year-old Michigan native made her entrance around 10:15 p.m., appearing in an interesting medieval setting to belt out the uninspiring “Iconic,” from this year’s “Rebel Heart,” Madonna’s 13th studio release. The eyes remained entertained, even if the ears weren’t, as Madonna and her sizable cast of dancers cast a Far East vibe on the marginal new album cut, “Bitch I’m Madonna.” In all, it was a pretty lackluster way to start the two-hour-plus show.

She then zoomed back for “Burning Up,” the popular single from her self-titled debut of 1983. But she refused to play the wonderful dance-pop tune straight, instead deciding to grab an electric guitar and rock it up a bit. It was one of many remixes that simply didn’t work in the show.

The result was often infuriating. It’s bad enough that Madonna wanted to stock the set list with subpar new songs. It’s worse that she decided to sabotage many of the old fan favorites with new arrangements. Yeah, thanks for making it hard for us to sing along, Madonna.

This tour needs a better game plan. Madonna rushed in the wrong spots, sowing together unsatisfying snippets of some of her best-known offerings (such as “Dress You Up” and “Lucky Star”) when a better choice would have been to play the whole songs. Then she’d dawdle when the exact opposite approach was called for, such as when she allowed the wind to go out of the sails of the main-set closer, “Unapologetic Bitch,” as she chatted with an audience member. It was one of the most anticlimactic main set closers I’ve ever seen.

Still, Madonna exhibited plenty of star power. And the visuals were often interesting enough to carry the moment. Barely. But we’d hoped for so much more.