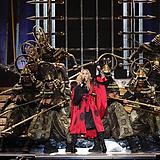 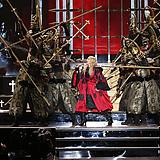 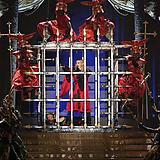 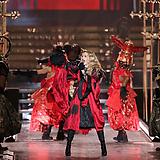 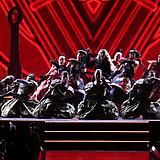 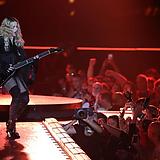 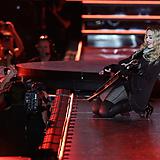 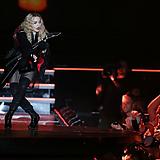 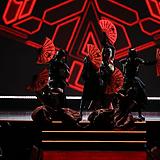 A storm descended on Atlantic City Saturday night, and it didn’t have anything to do with rain or winds.

Madonna lit up Boardwalk Hall in lights, pyrotechnics and a team of extremely talented dancers. Nothing less was expected from the Queen of Pop on this stop of her U.S. leg of Rebel Heart Tour, presented by Borgata Hotel Casino & Spa.

People streamed into the hall wearing rain boots, heavy jackets and umbrellas, but were undeterred in their devotion to the singer. The crowd filled in on the floor around the cross and heart runway that extended the stage a couple hundred feet.

Madonna opened the show performing “Iconic” off her new album. She descended from the ceiling in a black cage while Mike Tyson, former professional boxer, appeared on a huge screen behind the singer. She made a dramatic opening with an entourage of samurai warrior dancers.

She might not move as swiftly as a 20-something anymore, but by the way she was lifted and spun in the air by dancers, you would think Madge had a never ending supply of energy. And theatrics.

“She looks just as gorgeous now as she did then,” said Lynn Lanza, of Hammonton, who came to the concert with her friend Sue Perna and their daughters, Aspen and Gianna.

Classic hits were mixed in among a heavy tour set-list. The crowd got the loudest when the singer did an acoustic version of “True Blue” and sang along to all the words of the 1984-hit, “Like A Virgin.”

The number of stage, outfit and prop changes was enough to keep anyone entertained, even if some of her most recent songs escaped crowd members. The concert was more than a concert—it was a show with multiple acts and never-ending movement.

The Material Girl might have sung with a good layer of voiceover, but nobody seemed to care when watching the skill that went into the choreographed numbers. Earlier in the show, while performing “Holy Water,” a dozen half-naked nuns danced provocatively alongside the singer and recreated a risqué version of Leonardo da Vinci’s “The Last Supper.”

During “Body Shop,” another song from her most recent album, the stage was equipped with a car, gas pump, tire racks and what else? Sweaty, sexy auto body mechanics on their backs on rolling dollies, which Madonna then used as human scooters.

“I love you too, Atlantic City,” she said between songs. “Are you having a good time?”

Boardwalk Hall looked like it was filled to the brim, even if tickets weren’t sold out before the night’s event. One of the most unique parts of the night happened when Madonna played a ukulele and sang “La vie en rose” in French, which garnered her loud applause and cheers.

The singer closed the show by coming out for an encore performance to“Holiday” draped in an American flag and star cape.

“Thank you Atlantic City. Thank you New Jersey. Thank you to everyone who came out, you were a great crowd. We love you. Goodnight,” Madonna said.

You might not know all the words to her new songs and she might not move the way she did 30 years ago, but her Rebel Heart Tour stop in Atlantic City was something to see. She moves on to perform in Toronto on Monday.