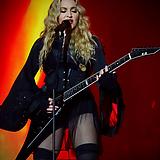 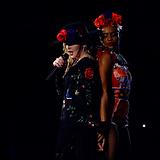 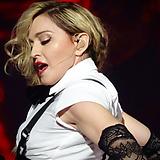 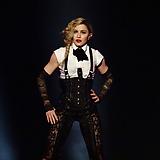 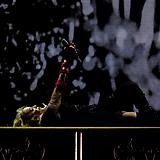 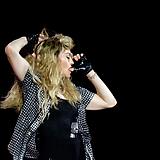 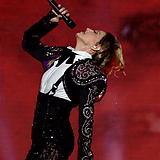 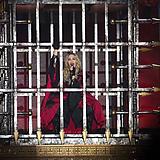 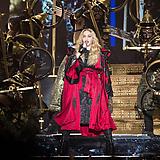 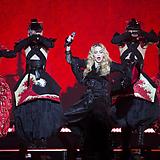 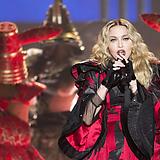 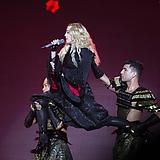 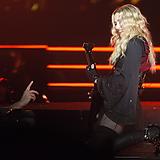 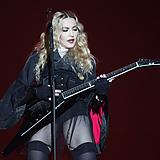 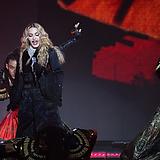 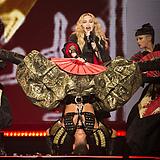 Even before Madonna took the stage Monday at the United Center, the senses hit overload. Warrior dancers hoisted crosses, Mike Tyson issued threats from the video screen, fake blood streamed as if from a tabloid murder photo, and “Twinkle, Twinkle Little Star” provided the soundtrack.

Music isn’t quite incidental to the spectacle that is a Madonna show, it’s more like an ingredient in a multimedia melting pot of outrageous fashion, noir video, theater, dance, performance art and social commentary. There were 20 dancers and three musicians, 22 videos and a whopping 60 people backstage taking care of costumes that ran from Cotton Club fringe to a long, flowing royal cape. There was even a Britney Spears look-alike pulled from the audience.

More difficult to find on many of the singer’s tours was an emotional center. But that wasn’t a problem Monday – the most intimate Madonna tour yet. It’s tough for any pop entertainer, let alone a 57-year-old female artist, to retain her chart appeal for one decade, let alone four. Madonna may still be the most famous woman in the pop world – Beyonce might take issue with that – but she’s had only a few top-10 singles in the new Millennium.

Though she could easily live off greatest hits tours or Vegas residences, Madonna somehow remains engaged. Her latest album, “Rebel Heart,” is a mess, a tangle of proclamations and confessions. She wants it all. There are songs that expose insecurities and fess up to narcissism. And then there are the tunes that basically say, “I’m old enough to be your mom and I can still do anything you can do better – got a problem with that?”

The defiant attitude, the provocative posturing that defined her early rise to stardom played a part in the show, but these poses felt tired – yesterday’s shock is today’s act of desperation. Fortunately, the attitude became more playful and introspective as the show proceeded through its four major set pieces.

Half the set list was drawn from the commercially under-performing “Rebel Heart,” even though the singer has more than three dozen top-10 hits, mostly from the ‘80s and ‘90s. But even the hits she reprised were often reconfigured, from the jazzy “Material Girl” to the ukulele-led “True Blue.” Whereas her 2012 tour flirted with darkness and death – yes, Madonna can do Goth, too – the current two-hour performance had a lighter, warmer, more personal tone. There were smiles and something approaching vulnerability.

For “Like a Virgin,” Madonna dialed down the bump and grind for a solo performance that came across as quietly celebratory, as though dancing by herself in a darkened bedroom. A solo “La Vie en Rose” may not have approached the towering heart-break of Edith Piaf’s signature version, but Madonna delivered it with a rich tone that would’ve been beyond her during her hit-making prime.

With fans packed closely around her on a heart-shaped stage in the middle of the arena, she prefaced “Who’s That Girl” with a statement: “I’m still trying to figure out who I am.” Who needs shock appeal when you’ve got Madonna psychoanalyzing herself on stage?

The moment came when the background music of Michael Jackson’s “Wanna Be Starting Something” disappeared from the loud speakers, then the arena lights turned off. The large “Rebel Heart” drape cover came off the stage, and there stood a video screen depicting Madonna as the Joan of Arc getting ready to fight off the warriors as Mike Tyson made his video appearance declaring victory and defiance. Madonna entered in full view, locked in a cage to wild applause.
Decked out in a heavy red warrior outfit as her warrior dancers drew their weapons towards her while she sang the new song titled “iconic”, which would lead into her next single, “Bitch, I’m Madonna” snapping her fan similar the way she did “Vogue” at the MTV VMAs back in the day. She took off the warrior garb, grabbed her electric guitar, and launched into a spirited throwback version of “Burning Up,” an early hit from her debut album.

Meanwhile, folks behind me were loudly complaining that they weren’t hearing her old hits as she was playing “Burning Up”. This prompted me to turn around, and tell them, “This is one of her first songs. Too bad you’re not a real fan.” The inner fan in me threw the shade down faster than the solar eclipse.

When you spend $100 just to sit in the upper level, and then waiting months in anticipation for the concert, the last thing I need is to have my evening interrupted by a bunch of folks demanding what songs they want to hear. I thought to myself how much I would have enjoyed being in the general admissions floor, and to be around die-hard fans who know her songs in unison, rather than be stuck in the upper level with folks who know a couple of big hit songs, or those that were dragged to the show by their loved ones.

Too bad, my income isn’t as big as my enthusiasm to shell out the several hundred dollars to be in that sought-after section.

Read his full story at randall-kimball.com